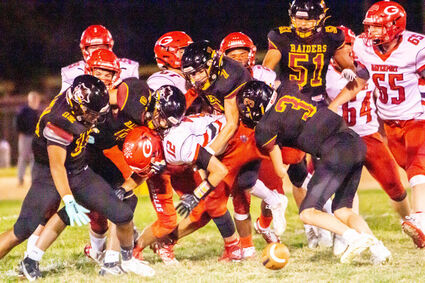 A swarm of Raiders forces a fumble from Davenport running back Marcus Delafield. The Raiders from left to right are: Gabe Waters, who recovered the fumble for the Raiders, Chase Clark, Bosten Hevener, Tanner Kiser, and Sergio Galicia. - Jacob Wagner photo

Davenport put the first points on the board with a rushing touchdown and a two-point conversion to go up 8-0.

In the second quarter, Raider Gabe Waters recovered a Gorilla fumble but the Raiders were unable to cash in.

Later in the second quarter, with under a minute left in...