Smoke may clear this evening 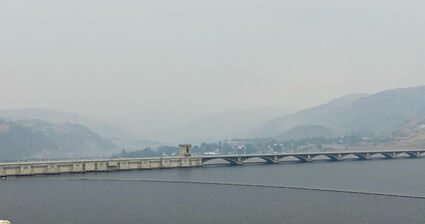 Despite strong winds and high heat Thursday, firefighters on the Whitmore Fire south and west of Nespelem managed to limit fire growth to just 18 more acres without the help of aircraft on the 57,478-acre fire, Friday morning’s update says.

The wind out of the north and the smoke it brought with it from other fires kept aircraft out of the effort.

Air quality was expected to remain in the “unhealthy” to “very unhealthy” range throughout the area today and into Saturday, according to a meteorologist on nearby fires.

However, after that outlook was issued, the NWS reforecast its own air quality alert to end at 6 p.m. tonight (Aug. 13) when wind direction is expected to shift toward the east and northeast, potentially cleaning up local air, which currently registers between 195 and 300 at Purpleair.com, where a healthy level of fine particulate matter is rated below 150.

A smoke forecast tool at wasmoke.blogspot.com shows air quality getting better and worse at times through Aug. 17.

The rest of the update:

“The north winds also continued to direct smoke south from fires in northern Washington and British Columbia onto the Colville Reservation. This smoke over the region from fires to the north helped to dampen fire activity, but the combined winds and smoke also prevented aircraft from flying yesterday.

“Last night, firefighters again used the specialized drone for firing operations along the Dan Nason Basin Road, cleaning up and securing that portion of the fire’s edge. Around most of the fire perimeter, fire crews are working on mop-up to strengthen the fireline. These mop-up actions will continue for the next several days as crews work to hold, deepen, and improve the fireline. Mop-up includes extinguishing or removing burning material along control lines and working to trench logs to prevent them rolling down into unburned areas, which makes the fire perimeter more secure and reduces residual smoke. Firefighters anticipate very little growth in the fire’s footprint beyond the current size, and most additional acreage at this point would be the result of limited burning operations to secure and clean up areas on the fire perimeter.

There will be increased traffic due to the Omak Stampede this weekend. Please use extra caution driving as fire equipment accesses the northern portion of the fire from SR155 and will be entering and exiting side roads.”

Level 2 evacuations remain in place for the Columbia River Road corridor, Kartar Valley, Colville Agency, the community of Nespelem, and the SR155 corridor from Colville Agency north up to the Mission.

The Whitmore Fire is located on the Colville Reservation south of Omak Lake and west of Nespelem, WA. The Incident Command Post at Nespelem Community Center is closed to all but essential personnel to help ensure the health and safety of community members and firefighters.

With three fires still very active on the Colville Reservation, firefighters were taking advantage of cooler weather Monday and Tuesday to prepare for high heat to come.

The fires have consumed more than 121,000 acres of reservation resources so far.

Heavy smoke in the area on Tuesday came both from fires in Canada and more locally.

On Monday, aircraft dropped water and fire retardant on spot fires while hand crews constructed fire line in the northern part of the Whitmore Fire and developed plans to protect homes along SR 155, “in case fire spreads further to the north and east,” an operations report issued Tuesday morning stated.

The fire started Aug. 3 by a lightning storm.

Areas in danger still include the town of Nespelem. Level 2 evacuation notices were still in place for the Columbia River Road corridor, Kartar Valley, Colville Agency, the community of Nespelem, and the SR155 corridor from Colville Agency north up to the Mission.

The Whitmore Fire has burned 56,454 acres, and structures have been lost.

Some 306 personnel are on the fire, which was 25% contained Tuesday night.

With the Omak Stampede being held this week, fire managers are concerned traffic on SR155 will step up, “significantly increasing safety concerns since that is the main route to the north portion of the fire.”

The Summit Trail Fire near Inchelium has burned 28,250 acres and is 33 percent contained. It started July 12 and 507 personnel are fighting it and the Upper Lime Creek Fire, now at 347 acres with 88 personnel six miles north of Keller. It’s 15% contained and is expected to be fully contained Sunday.

More locally, firefighters worked to put out spot fires Sunday evening, following a morning lightning storm that struck several times on the hilltop over Coulee Dam that hosts several communications towers east of Grand Coulee Dam. A helicopter made repeated trips to the river to douse fires that were found.