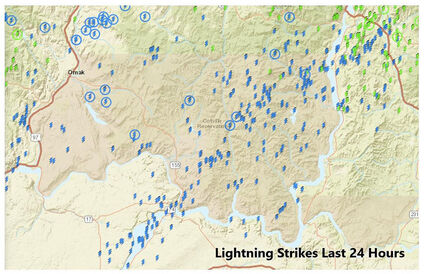 A map shared on the tribal broadcast page indicates lightning strikes in the region during Tuesday night's storm.

Several new fires have started on the Colville Reservation following a lightning storm Tuesday night, and evacuations are in effect, with the largest of the fires already estimated at 2,000 acres.

Residents from Kartar Valley, Goose Flats East to the net pens on the Columbia River Road and everything north of that road have been notified of a Level 3 Evacuation, meaning leave immediately, the Mt. Tolman Fire Center said in a release Thursday afternoon.

Residents south of Columbia River Road from lower Coyote Creek Road to Peniel Ranch Road have been notified of a Level 2 Evacuation, meaning "BE READY."

"This level indicates there is a significant danger in (that) area, and residents should either voluntary relocate to a shelter or with family /friends outside of the affected area," the release stated.

Animals can be evacuated to the Nespelem Rodeo Grounds near Schoolhouse Loop Road in Nespelem.

The largest of the fires are the Hamilton Fire, at approximately 1,000 acres; and the Whitmore Fire, about 2,000 acres. Both were started by lightning.

Mt. Tolman may hand over command of the fire as early as Thursday night to Northwest Team 12, which recently managed the Chuweah Creek Fire near Nespelem and was briefed today on the new situation.

Residents in the area have been notified of a Level 1 Evacuation, meaning residents should be alert and ready, aware of the danger that exists in their area, and should monitor local media outlets for information.

Three other fires continue to be in patrol status: 17-Mile, Owhi Lake and Rat Ranch.

The National Weather Service has issued a "red flag warning" for the region until 11 p.m. tonight, indicating new dry lightning storms could cause more fires and bring winds from 15 to 25 mph gusting up to 45.