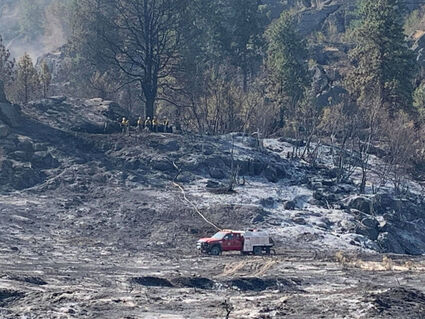 A strike team of firefighters from all over the state, coordinated by the Washington State Patrol-Fire Marshal's Office, overlook a burned hill in Northrup Canyon Saturday. The fire engine is from Sky Valley.  - Southeast Washington Type 3 Interagency Incident Management Team 2 photo

A fire that started along the highway along Banks Lake Thursday evening quickly turned into a threat to a local landmark canyon and to farms above the coulee wall.

The Northrup Fire that scorched the canyon its named for started about 5 p.m. July 22 at milepost 18 on SR-155. Logan Braaten caught an image of the fresh fire on the coulee wall side of the highway and posted it on Facebook.

Local firefighters responded quickly, but the intensity of the fire's approach during initial attack took at least one a little by surprise. He radioed Incident Commander Ryan Fish that he was backing off. "This is just too intense." 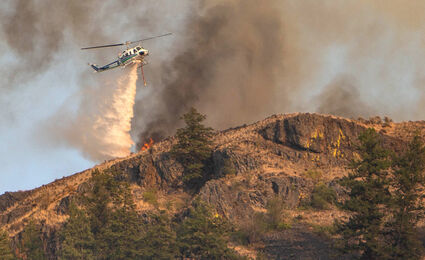 A helicopter stationed at Grand Coulee Dam Airport by the state Department of Natural Resources dumps water on flames on a ridge in Northrup Canyon Thursday. - Scott Hunter photo

He wasn't the last firefighter to note the behavior of the fire fed by extremely dry material that eventually burned 247 acres as firefighters from across the state joined the battle, along with five helicopters, four Fireboss airplanes, two tankers, and an air boss plane.

One house at the base of Northrup Canyon was evacuated but saved. Residents in Northshore Acres were told to get ready to leave at a moment's notice, but that moment never came.

SR-155 was shut down. The state Fire Marshal's office authorized a statewide mobilization to draw in firefighters from all over the state, totaling 109 personnel, including those on 13 engines on the fire.

No structures were lost.