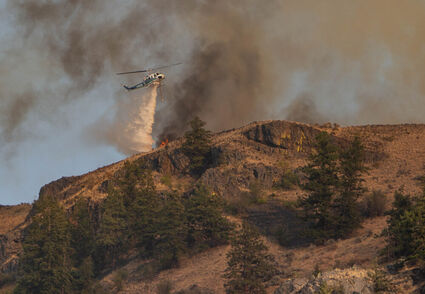 A helicopter douses a flame popping up on the ridge between the wheat fields above the coulee wall and Northrup Canyon below at the beginning of a long air attack involving four Fireboss airplanes, a jet tanker, four helicopters and air attack control plane, plus all the firefighters on the ground, local and coming in from far away.

The fire that started along SR-155 Thursday afternoon has burned about 300 acres, prompted evacuation notices and still threatening structures and standing wheat.

It was moving down into Northrup Canyon last night as four Fireboss airplanes, three helicopters and a jet tanker attacked it from the air, and more resources were arriving as firefighters headed up to canyon on foot about dusk. An hour later, authorities were knocking on doors in the North Shore Acres community near Jones Bay, telling residents to get ready to leave, a Level 2 evacuation notice.

A level 2 evacuation notice (get ready to go on a moment's notice) is still in effect for North Shore Acres residents. One home at Northrup Canyon has been evacuated and is currently safe, an information release from Grand Coulee Volunteer Fire and Ambulance said.

The Red Cross is setting up an evacuation center at Lake Roosevelt High School in case it's needed.

Highway 155 is closed from North Shore Acres south of Electric City to the junction with US2 north of Coulee City and will remain so until the area is safe along 155 and aerial operations are completed.

The cause of the fire is under investigaton.

The press release is below:

The Northrup Canyon Fire started on July 22, 2021, at approximately 5:06 p.m. This fire is estimated at 300 acres and growing. It is threatening structures and standing wheat. Level 2 and 3 evacuations are in effect at this time. The fire cause is currently under investigation.

The State Emergency Operations Center at Camp Murray will remain activated to Level 2 to help coordinate state assistance for the Northrup Canyon Fire. Mobilization specialists from the Fire Protection Bureau have ordered two strike teams and the fire will be managed by a Type 3 Incident Management Team. State Fire Marshal's Office personnel are both en route to the scene and working remotely to coordinate the dispatch of resources.

Under the State Fire Services Resource Mobilization Plan, the Fire Protection Bureau coordinates the initial dispatch and continued administrative oversight of resources and personnel for the duration of the mobilization. The Mobilization Plan is implemented to provide a process to quickly notify, assemble and deploy fire service personnel, equipment and other resources from around the state when fires, disasters or other events exceed the capacity of local jurisdictions. More information about the Washington State Fire Services Resource Mobilization Plan is available at: http://www.wsp.wa.gov/all-risk-mobilization/.