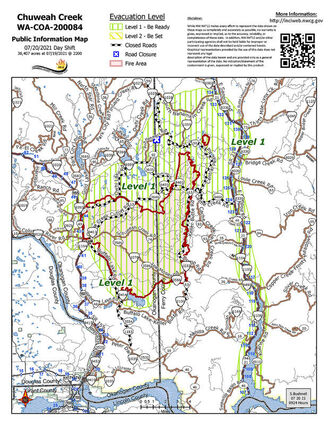 The Chuweah Creek Fire, which has burned 36,177 acres since it started by lightning July 12 east of Nespelem, is now 40% contained, according to a July 20 update on the fire.

Firefighters faced challenges July 19 "as rising temperatures were accompanied by gusty winds and low relative humidity," the update reads. "Lines held, but some spotting and slop-over occurred, particularly on the northeast and lower eastern edge of the fire. Some spotting also occurred in the Central Peak area, as unburned interior fuels continue to

dry out and ignite."

"Efforts were aided by the use of significant air resources; however, there was another drone intrusion into airspace, temporarily impacting firefighting efforts."

A Red Flag Warning was in effect Tuesday, as gusty winds and low relative humidity persist. Line construction along the north and east edges of the fire remain a priority as crews work to connect established containment lines. Firefighters worked Tuesday to hold the line along Keller Butte Ridge on the eastern flank. Engines were to continue to patrol the south and

west edges of the fire.

Firefighting resources are being shared between the Chuweah Creek Fire and the Summit Trail Fire, located east of Inchelium, which also started by lighting on July 12 and had burned 4,650 acres. It was at 0% contained according to a July 20 update.

• Level 1 evacuation notifications were in place for residents of the town of Nespelem as well as the town of Keller, Buffalo Lake and McGinnis Lake communities and the San Poil Valley/Highway 21 corridor from South Nanamkin to the Keller Ferry.

• Evacuation levels had been reduced from Level 2 to Level 1 for residences at Owhi Flats and east of Owhi Lake, as well as residences along Cache Creek Road.