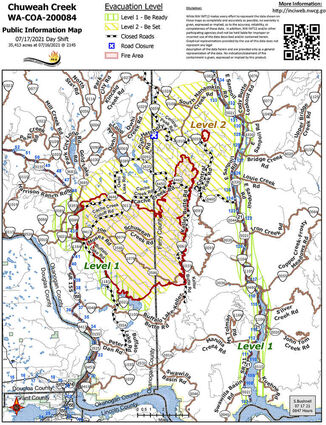 Here is this morning's update on the Chuweah Creek Fire from the incident commander, along with an updated map. Cooler weather is helping for now, and acreage estimates have been changed with better mapping.

which was started by lightning on July 12 and is burning east of Nespelem.

Yesterday, lower temperatures and a reduction in wind gave resources a

chance to make progress on securing line around the fire.

Crews will focus on the southeast corner above Cache Creek Rd. to find a

direct route to attack the fire, as well as the northeast corner, working north

along Keller Butte Ridge to halt fire progress. An aggressive approach will

in temperatures and the potential for thunderstorms early next week.

With better mapping, the acreage on Incident 90 (Central Peak Fire) is

estimated to be approximately 213 acres. There is a dozer line around the

fire and firefighters continue to monitor and mop up around the perimeter. It

is burning two miles northeast of the Chuweah Creek Fire.

Level 2 evacuations remain in place along Cache Creek Rd. and in the

area of Owhi Flats and Owhi Lake. Level 1 evacuations remain in place in

• Level 1 evacuation notifications are in place for residents of

Lake and McGinnis Lake communities and the San Poil

• Level 2 evacuations are in place for residents at Owhi Flats

and east of Owhi Lake, as well as residences along Cache

The Chuweah Creek Fire grew another 5,000 acres in the last 24 hours, and firefighters are working to protect structures along Cache Creek Rod and hld te fire along the easter edge of Keller Butte Road, a report from incident command said this morning. It now encompasses 37,283 acres.

"Fire growth has slowed considerably along the northeastern edge between Nespelem and Buffalo Lake," the report noted.

"Level 3 evacuations that were in place along Cache Creek Rd. have been reduced to level 2. Level 1 evacuations remain in place in Nespelem, Keller and the San Poil Valley south of South Nanamkin Rd.," the report continues.

A community meeting will be held at the Keller Community Center today, July 16, at 1:30 PM. That meeting will also be streamed via Facebook on the Northeast Washington Fire Information page.

Nespelem as well as the town of Keller, Buffalo Lake and

corridor from South Nanamkin to the Keller Ferry.

Owhi Flats and east of Owhi Lake, as well as residences along

At 8:50 a.m. this morning, fire officials reported the Chuweah Creek fire has grown to 32,290 acres in size, at about 20 percent containment.

The fire grew toward the east and northeast, aided by wind, fuels and terrain, crossing Cache Creek Rd. east of Shiloh Rd.

The fire has burned east to Keller Butte Road and has crossed the road in several places.

"The fire is expected to grow as high temperatures, low relative humidity and gusty winds are predicted across the area today," the update says. "Additional resources have been ordered and will be assigned to the fire as regional priorities allow. Air resources will be heavily utilized again today."

At 8:25 p.m. last night, fire officials reported the Chuweah Creek fire is burning south and east of Nespelem and has grown to 22,900 acres, about 20 percent contained.

They're estimating containment at midnight July 23.

Incident Commander Robert Shindelar, of NW Team 12, assumed command at 6 a.m. Wednesday. He reports that 200 personnel are on the fire, which is predicted to move east and north toward Cache Creek Road.

Because of the hot, dry weather and many other fires in the region, ground resources are hard to come by, but "an aggressive air attack strategy is underway with additional aircraft on order," Wednesday night's report reads. "Please avoid waterways and air space in the fire

area to allow planes and helicopters to work safely.

No drones should be operated anywhere near fire air space, officials caution. That halts efforts to fight fire from the air.

"The fire is expected to grow as high temperatures, low relative humidity and gusty winds are predicted to continue across the area through Thursday," the report continues.

"With the current weather there are simply not enough resources to protect residences and other structures and contain the amount of fire perimeter. Additional engines and crews are needed along with line supervisors to manage them. Additional heavy equipment is needed as well," reads a fire report on InciWeb incident information system site.

Some weather relief is expected through Saturday, however, with high temperatures cooling to the 80s. But relative humidity will remain very low and winds elevated through the weekend. Humidity was in the single digits Wednesday, making it easier for fuels to burn.

Level 1 evacuations are in place for residents of the town of Nespelem.

Level 2 evacuations are in place for residents at Owhi Flats along Cache Creek Rd.

Level 2 evacuations are in place for residents in Buffalo Lake and McGinnis Lake communities.

The fire took out CenturyLink equipment, leaving the town, the agency, Tribal Police, and the Mt. Tolman Fire Center, itself, without phone service.

The release said that several livestock, horses, and wildlife had been killed by the fire or were severely injured and had to be put down.

The fire started about 7:15 Monday night when a thunderstorm rolled over the land, lightning striking the earth about 60 times.

The tribal government decided Tuesday to close the reservation in "a state of emergency ... due to multiple uncontrolled fires," a tribal statement issued in the evening said. "The Reservation is currently shut down to industrial activities and to the general public. The Tribes has imposed an Industrial Fire Precaution Level IV general shutdown, which closes all forest roads to the public. State and county improved roads (with a paved or gravel surface) remain open."

"Our priority is always the safety of all people on the Colville Reservation, and we will also protect property to the best of our ability," Colville Business Council Chairman Andy Joseph, Jr. stated. "Our hearts and thoughts go out to the people already impacted by these fires. We thank those coming onto our land to assist us in fighting these fires, and we appreciate the donations and offers for help that are already coming in. The need for action to protect our climate, and to mitigate the effects of climate change, becomes clearer with each passing year and each round of devastating fires." 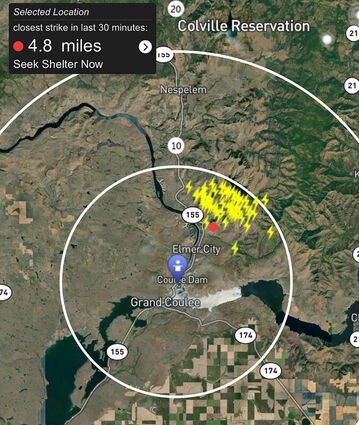 A map of some of the lightning strikes that hit the area Monday night. The image is a screenshot of the Weatherbug apps lightning feature. The National Weather Service told tribal fire officials there were about 60 strikes.

How to donate for recovery

The Colville Tribes said Tuesday they'd been approached by concerned parties wanting to donate toward recovery efforts following the fires.

Those wanting to donate items should contact Brian Nanamkin at (509) 978-9197, who can coordinate such donations and "discuss the types of donations that are helpful at this time," the tribes said in a statement.

"Financial donations are the fastest, most effective and flexible way to donate to assist fire response," the statement continued.

"The Tribes' Chief Financial Officer, William Nicholson II, is ready to accept and account for any monetary donations made to the Tribes to defray expenses due to the current fires. He may be reached at (509) 634-2857 or at billy.nicholson.act@colvilletribes.com," the Tribes stated.