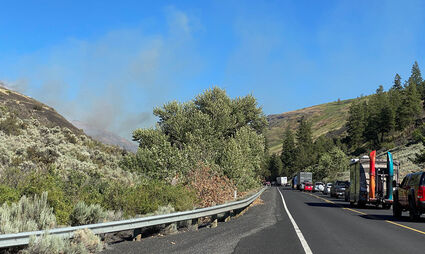 Cars stack up as a fire along SR-174 on the hill toward Wilbur closed down the highway Friday while firefighters work to contain the blaze. Grand Coulee's volunteers answered the call about 4:30 p.m. The "Spring Canyon Fire" was eventually turned over to the state Dept. of Natural Resources fire crew. A helicopter and a fixed wing aircraft also joined the effort, which was successful in keeping the fire from reaching the rim of the canyon, where it could have taken off into fields, threatening structures. Grand Coulee Chief Ryan Fish said it burned 15-20 acres on the steep, rocky hillside. The road was closed for over an hour and a half as temperatures reached into the mid 100s.- Scott Hunter photos

Don't even think about lighting a firework, smoking or target shooting on public lands in these conditions.

"The fire restrictions order includes prohibiting the discharging of a firearm, except while engaged in lawful hunt pursuant to state, federal or tribal law and regulations," the news release says. "The building, maintaining, attending or using a fire, including charcoal briquette fires, except when contained within provided metal rings, will also be prohibited."

"The new restrictions are expected to be in effect until fire conditions change," the release says. "The agency is encouraging target shooters to visit local private and public target range facilities during this time."

In addition to prohibiting target shooting and some campfires, restrictions on the use of off-road vehicles, and smoking are also prohibited on public lands administered by the BLM and the Bureau of Reclamation (BOR) in eastern Washington.

Firing off fireworks and entering an area closed by a fire prevention order are also mentioned as prohibited.

Additionally, fires in the Lake Roosevelt National Recreation Area have been prohibited since June 25, until further notice. 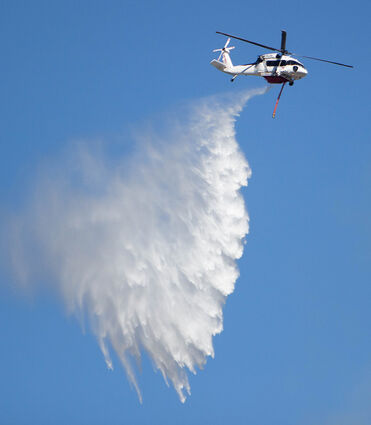 "No open flames are permitted," a notice from the LRNRA announced. "This includes, but is not limited to, all fires in NPS provided fire rings and boxes, shoreline fires, charcoal fires, tiki torches, incense burners, candles, and propane campfires. Self-contained propane or gas stoves and lanterns are still allowed during the full fire ban. For the most current information regarding the fire ban in the Recreation Area, please call 509-754- 7893."

"With the extreme heat and dry conditions, we are urging everyone to exercise extreme caution with campfires, fireworks, safety chains on towed vehicles, and other possible ignition sources," they said in a statement issued after 6:30 p.m.

"Also, please use firearms responsibly, do not use exploding targets and only use firearms at designated shooting ranges," the statement continues. "We have great concern for your safety and want to protect our county's homes, farms, businesses, and landscape."