After vote, Coulee Dam credit union to merge with STCU 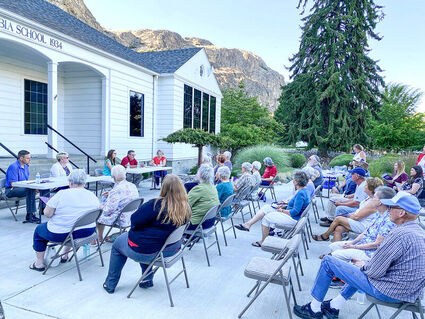 With a historic vote finalized Monday night, the 80-year-old credit union that originated in Coulee Dam will merge with one 23 times its size based in Spokane.

After 1,045 votes cast either by paper ballot sent in or online through a third-party election firm, 84% of those voting found the benefits of joining with STCU outweighed the loss of the name Coulee Dam Federal Credit Union.

At a member meeting on the front patio of the Coulee Dam headquarters, CDFCU CEO Collene Manley urged people to look at what they're gaining in services and options for members.

One member told STCU Chief Executive Officer (formerly Spokane Teachers Credit Union) relief at the fact that he'd have a branch six blocks from his new senior living home in Spokane and wouldn't have to change credit unions.

A brochure handed out at the meeting listed some 35 branches, including CDFCU's, all in Eastern Washington and North Idaho.

STCU had nearly $4.5 billion in assets in March, according to the National Credit Union Service Organization, serving more than 226,000 members. CDFCU had about $196 million in total assets and 14.500 members.

STCU's CEO Ezra Eckhardt sought to assure members that STCU abides by a "members-first and employees always" ethic that still stems from its personalized beginnings 84 years ago out of a schoolteacher's window at Lewis and Clark High School, where he would lower a shoebox on a string for people making deposits.

"I think what's important is that CDFCU is going to live on in the heart of STCU," Manley said.

Eckhardt said STCU is looking into getting the building they were speaking in front of, the former Columbia School, to the National Historic Register.

Both Manley and Eckhardt stressed that they would work to keep the transition simple for members, minimizing complications.

Members should expect a packet of information to introduce them to the new organization soon. The merger is expected to be finalized in the fall.