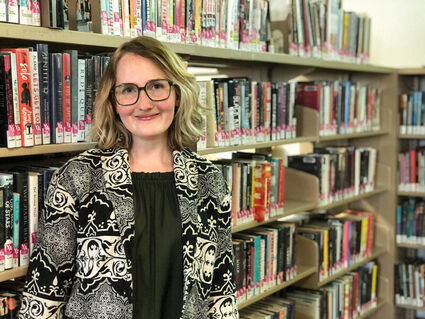 The Grand Coulee Library has a new librarian, Catherine Matthews, and she's excited to meet you.

Matthews moved to Electric City by way of Whidbey Island and started work at the library on May 18.

Speaking with The Star by phone, Matthews explained her love of books and libraries.

She said that she always went to her local public library as she was growing up and got exposed to different viewpoints and opinions.

"I read a lot," she said. "I read very widely, across genres and lots of different authors."

She has recently been reading Jason Reynolds who writes books focused on social justice, and Elena Ferrante who wrote "a really beautiful series" ... "about two women growing up in a rural town in Italy," as Matthews puts it.

She mentions Zadie Smith as another author she likes, as well as Donna Tartt who wrote "The Secret History" and "The GoldFinch".

"She's really incredible," Matthews said. She also likes classics like "Sylvia Plath and poets in that kind of realm."

Reading on her phone instead of a paper book is something she's still getting used to, she said, but she's enjoying it, and the library has a service called Libby from which you can download, check out, and read books electronically.

"One of the reasons I was drawn to libraries is how impactful they can be in reaching all parts of the community," she said. "All people are welcome here no matter their race, gender, sexuality...  we try to serve everyone. ... For a small community, we have the opportunity to create impactful relationships. I think the library is a cornerstone in a community like this."

Matthews has worked as a reference and instruction specialist at the University of Washington Fine and Performing Arts Libraries; a public service technician at UW Branch Libraries; an access services specialist at Suzzallo & Allen Libraries; and a library assistant at Skagit Valley Community College.

She graduated in March with a master's degree in library and information science from UW, where she had previously earned a bachelor of arts in English, language and literature.

Having grown up on Whidbey Island on 10 acres of remote property, Matthews said she isn't experiencing culture shock being in the Coulee area; Seattle was more of a culture shock for her.

"It's been really nice to live here," she said. "Everyone's been very nice. I've been enjoying the landscape a lot. That's different and amazing, the glacial impacts on the cliff sides. I've really been enjoying my time going for drives and bike rides, trying to enjoy the weather."

She said she looks forward to meeting community members and hearing their stories.