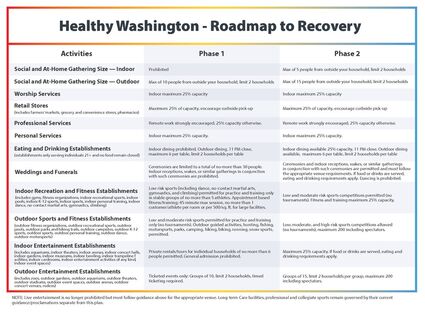 Just in time for Valentine's Day on Sunday (updated), the North Central Region will enter the less-stringent Phase Two of Washington State's Roadmap to Recovery planned approach to the COVID-19 pandemic, the governor announced Friday, after setting the move-up date to Monday previously.

The move up allows for indoor dining at restaurants, with restrictions, and some, including Spokane Mayor Nadine Woodward, had publicly appealed to the governor to have a heart for the restaurant industry, which could benefit from adding indoor seating on Valentine's Day, Sunday.

Currently, only the Puget Sound and West Regions are in Phase Two, which has less stringent restrictions on individuals, businesses, and schools.

Out of the eight total regions, only the South Central region has failed to meet the four requirements to move to Phase Two.

The North Central Region, which include Grant, Okanogan, Douglas, and Chelan Counties, is meeting the four requirements to move to Phase Two.

A chart shared by Inslee on his Twitter page shows that the North Central Region has a 40% drop in new Covid cases per 100,000 population in comparing Jan. 17-30 data to the two weeks prior, meeting the 10% drop requirement to move to Phase Two.

Those regions progressing will be able to do so starting Sun., Feb. 14. This creates more options for restaurants to make Valentine's Day special for couples who hoped they could have a night out. (And if it's a first date that doesn't go well, remind them to stay 6 feet away). https://t.co/o6AC5IdLZi

The region also shows a 60% drop in hospital admissions comparing Jan. 24 through Feb. 6 to the two weeks prior, meeting the 10% drop requirement to move to Phase Two.

The region had an 87% intensive care unit bed occupancy from Jan. 31 through Feb. 6, meeting the less than 90% requirement to move to Phase Two.

And finally, the region shows a 10% Covid test positivity rate, with the requirement to move to Phase Two being less than 10%.

To remain in Phase 2, regions must meet at least three of four metrics: a decreasing or flat trend in both the two-week incidence rate and in hospital admission rates, an ICU occupancy of less than 90%, and a COVID-19 test positivity rate of less than 10%.

Failure to meet two or more of these criteria results in a region going back to Phase One.

The data, which is compiled by the Washington State Department of Health, is updated every two weeks on Fridays.

The differences in restrictions between Phase One and Two are detailed at https://www.grandcoulee.com/story/2021/01/13/news/state-begins-new-covid-recovery-plan/13799.html