Inslee lowers age of those eligible for vaccines 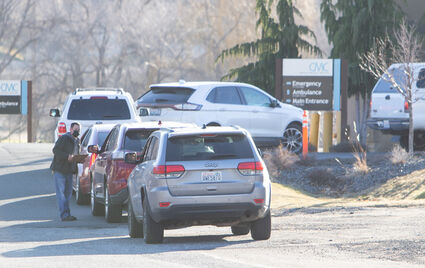 Just when residents of Washington will have access to a COVID-19 vaccine depends on how many doses the federal government delivers and how many the state can administer in a day.

Currently, the state is receiving 100,000 doses per week and administering 14,000 doses per day, but Gov. Jay Inslee acknowledged Jan. 18 there have been major bumps in the road so far.

"I have to be forthright with Washingtonians," Inslee said. "Patience is going to be one of the most important assets for us in the upcoming weeks and months."

The biggest roadblock to vaccine deliveries right now, according to Inslee, is the federal allotment the state is receiving. Inslee said he was confident that the state would be able to get an increasing number of vaccine doses each month, but he did not estimate how soon the federal government will be able to ramp up delivery.

Once doses are available, people who are 65 years or older, or who are 50 years or older and reside in a multigenerational household, are immediately eligible for a COVID vaccine, he said. He also stressed that residents who are eligible should contact their healthcare provider to find out when they can secure a dose of the vaccine.

Some 240 people got vaccinated in Grand Coulee Friday at drive-up clinic in the parking lot of Coulee Medical Center, said Ramona Hicks, chief executive at the hospital, where workers from Samaritan Healthcare in Moses Lake and CMC injected the arms of people who waited in line, sometimes from as far back as highway 174.

For residents in smaller rural counties, Inslee said the vaccine rollout could be slowed because, even though the currently eligible population for a county may already be completed, across the state, there are still 1.1 million people who fall under the new age category. Catching up to the backlog of medical workers who still need vaccines is also slowing down the process.

Inslee unveiled a goal of making 45,000 doses per day available, rising dramatically from the current federal allotment to our state of 100,000 per week. A list of mass vaccination sites will be ready by the week of Jan. 25, Inslee said.

Locally, the next vaccine clinic at CMC is scheduled to happen Feb. 5, although Hicks said they're hoping to fit another one in before that date, which is three weeks from last week's event. The Pfizer-BioNTech vaccine given then requires a booster in 21 days.

PhaseFinder, an online tool and app for vaccine information, shut down for a moment following Inslee's announcement, but due to a partnership with Microsoft, the server was running again with only a minor delay.

However, a glitch in the tool seemed apparent when after filling out the form, the site said this reporter was qualified to receive a vaccine, but the final step yielded an error message. Hicks said she'd seen the same error and thought the site was overloaded with traffic.

Susan Mullaney, the president of Kaiser Permanente, described the partnership as truly being a team sport.

"We're going to give all of you, every Washingtonian, our best effort." Mullaney said.

In announcing their plans, Mullaney and Inslee were joined by the presidents of Starbucks, Microsoft, and Seamar Community Health Centers as well as Jane Hopkins, a registered nurse and vice president of a nurse collective, and Dr. Umair Shah, Secretary of Health with the Washington Department of Health.

At the end of the questions, Inslee made mention of the next phase, which is planned to include essential workers like grocery store clerks and educators, though no date of when this will take effect was given.

"I'm thankful the governor agreed with the importance of expanding access to vaccinations for school employees," said 12 District Brad Hawkins, who was among legislators pushing for the change a week earlier. "His prior guidelines put those age 50 and older on track for being vaccinated as early as February, but a huge percentage of younger employees would have been waiting until April for their first vaccine dose, meaning the second dose wouldn't happen until the school year is nearly finished."