Vaccinations get a start in the Coulee 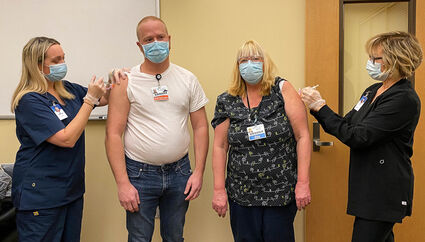 Dr. Jacob Chaffee, left, and Infection Control Nurse Sandy Edwards get vaccinated Tuesday against SARS-Cov-2, the virus that causes the COVID-19 illness. Chaffee and Edwards agreed to a photo as a way of endorsing the nationwide vaccine effort as safe. - Scott Hunter photo

Nearly half the staff at Coulee Medical Center got the shot Tuesday to inoculate against SARS-Cov-2, the virus that causes the COVID-19 illness.

The process was being managed and administered by Prevention Northwest, a company scheduled to manage the process at some 30 facilities by mid-January, according to CEO Jill Harvey.

CMC personnel were receiving the Moderna vaccine and will need a second injection 28 days later. The Pfizer-BioNTech vaccine was authorized for emergency use by the Food and Drug Administration Dec. 11, after an independent review committee. The next day, the U.S. Centers for Disease Control and Prevention's (CDC) Advisory Committee on Immunization Practices recommended it as safe.

In addition, another independent review committee set up by four western states, including Washington, came to the same conclusion: that data gathered in an extensive trial on thousands of volunteers and observation period of months supported the conclusion that the vaccine is safe.

The same process followed for the Moderna vaccine.

Nevertheless, doubts persist, a fact that could hamper the re-opening of American life if they're too widespread.

In Moses Lake, an initial vaccine clinic put shots in about 200 arms on a day when public health authorities had expected 400.

Answering an unscientific survey on their intentions, about two-thirds of the more than 36,000 recipients of Washington 12th District Sen. Brad Hawkins' e-newsletter said they plan to get vaccinated against the virus.

But that means a third don't plan to.

Even so, 53 percent told Hawkins it should be required for public school students.

Some 2,200 people answered his survey.

At CMC, as elsewhere in the country, health care workers most at risk of contracting the disease, along with elderly people in living in long-term care settings are first in line to get a vaccine.

Nurse Edwards, in line to get hers Tuesday morning, was most elated that the 10 long-term care residents at Coulee Medical Center had gotten their vaccines.