Huge fires getting under control 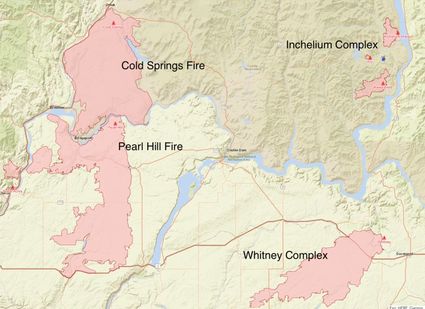 Fire perimeters are shown in this Northwest Incident Command Center's Large Fire Map for the blazes expected to be contained within a week.

The Labor Day fires that consumed hundreds of thousands of acres around Washington over the last nine days were coming under control Tuesday, but not before killing one infant, burning dozens of homes and other structures in the local region, taking out hundreds if not thousands of utility poles and hundreds of miles of ranchers' fencing.

The circle of fires at the center of which the Grand Coulee Dam community found itself, burned more land by far than all other fires in the state, tallied at 558,925 acres Tuesday night.

The Cold Springs Fire that started near Omak consumed 188,852 acres and destroyed 34 residences and 11 other structures. It was considered 60% contained Tuesday, with an expected containment date of Sept. 20.

That fire jumped the Columbia River in high winds, spreading from Okanogan to Douglas County. It overcame a family fleeing it from their property in Okanogan County, killing their infant child and burning the parents (see story this page).

In Douglas County, fire authorities dubbed it the Pearl Hill Fire, which burned 223,730 acres and torched 17 homes and 38 other structures and evacuating Bridgeport and Mansfield at times. It was 90% contained Tuesday, with full containment expected today (Sept. 16).

The Inchelium Complex of fires has threatened 448 homes but damaged only one so far, burning 18,940 acres. It was 53 percent contained. Full containment is expected on Sept. 21.

The Whitney Fire, which started on Hawk Creek Road in Lincoln County, has burned across 127,403 acres north and south of highway 2 between Davenport and Creston. It destroyed 10 homes and 40 other structures and damaged another 40, not to mention stacks of hay, miles of fence and damages still to be discovered.

It's 85% contained, with containment predicted for Sept. 21.