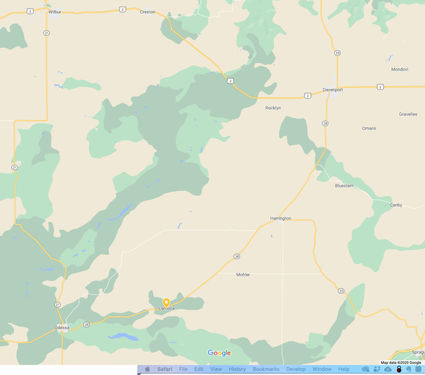 A woman, a man, and a teenage boy from Portland, Oregon were arrested near Lamona in Lincoln County on felony residential burglary charges Wednesday.

On Sept. 2, the Lincoln County Sheriff's Office received a 9-1-1 call at about 11 a.m. reporting a residential burglary in progress in Lamona, according to a press release from Sheriff Wade Magers. Lamona is almost halfway from Odessa to Harrington along SR-28.

responded to Lamona at Carlson Road. The reporting party described the suspects driving off in a black Subaru WRX after she saw one of the male suspects holding a drawer of stolen items taken from her home.

When she saw him, he yelled for the woman suspect to come out from the home; the other male claimed they were cleaning the home out for an estate sale.

"This, of course, was not the case!" a description from the LCSO says.

Within 30 minutes from the time of the call, Undersheriff Watkins located the suspect vehicle with the three suspects inside, parked on a rural county road, "presumably attempting to hide," the release states. The stolen drawer of items was also found nearby.

The vehicle was towed to the sheriff's office and the suspects arrested on felony charges.

Following a lot of paperwork to acquire search warrants, investigators found two debit cards, a checkbook, a deed from 1928, jewelry boxes, a coin collection, and more, which all belong to the victim in Lamona.

Also found were two passports, social security cards, and Oregon drivers' licenses presumed to be from other crimes, as well as a hypodermic needle presumed to contain narcotics.

Charged with felony residential burglary were Angela Dunson, 39, also wanted on nine outstanding felony warrants for reckless driving, possession of a stolen vehicle, forgery, and unlawful use of a weapon; Conrad Herrera, 43; and a 14-year-old boy reported missing out of Portland. Investigators couldn't identify the last two until Sept. 3 as a result of "false personation," the release states.

diligent response enacted by our deputies," the notice from the LCSO says. "Without their skills and the resources they provide, the criminals involved may still be violating our community and communities like ours."