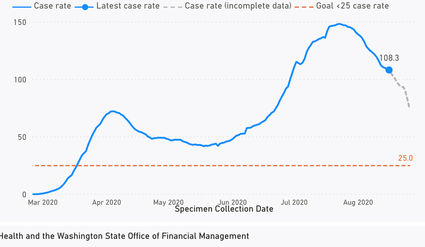 Grant County commissioners issued a "desperate appeal" Aug. 25 for the public's help in getting the COVID-19 epidemic in the county under control.

With the county's rate of new infections currently the worst in the state, commissioners Tuesday passed a proclamation recognizing that community commitment "at a 'grass root' level will be the most effective in succeeding at eliminating the covid-19 virus."

Since last Thursday, the Grant Health District had received reports of 63 new cases and another 21 "probable" cases for a total of 2,338. Two more deaths were reported Friday.

"We issue a desperate appeal to the Grant County community at large to implement the cautionary measures suggested by Grant County Health Officials," their proclamation, sent to media Wednesday, continues.

The commissioner said they feared that the "economy and the health and well being of the people of Grant County are severely compromised by our lack of urgency in controlling the virus."

They agreed that their collective leadership is important in compelling the community to act, and committed to "setting an example to the public in implementing the measures recommended by our Grant County Health Officials."

Dr. Alexander L. Brzezny, Grant County health officer, directed indoor mask wearing in the county on May 27, but the practice locally and nationally has been muddled by confusion and ambiguous, even contradictory, recommendations from national health and political leaders since early in the pandemic, leading to some continuing pushback against such orders.

Grant County commissioners sought to change that with their united proclamation and appeal to heed current health recommendations.

The language in the proclamation borrowed heavily from a similar one passed by Okanogan County commissioners a couple weeks ago, when that county had the worst incidence rating in the state.

Grant County's rate is in a downward trend from a peak of 598 cases per 100,000 population in 14 days a few days ago. Health authorities noted there's a long way to go toward the goals: for partial in-school classes that's 75, or just 25 in the last two weeks before a county can be considered for further re-opening.