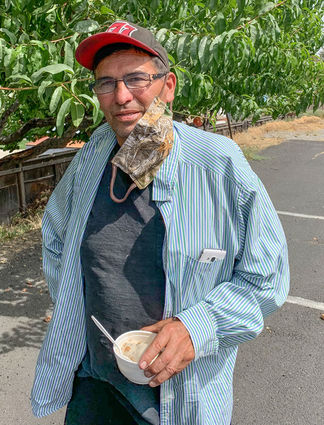 After a long hospitalization, Gary Carden is glad to have survived COVID-19. - Jacob Wagner photo

Gary Carden began taking the COVID-19 virus very seriously after he contracted the disease, was put on a ventilator - and survived.

Relaying his story over the phone on Monday, Carden, 63, said that on June 18, he was sitting in his chair in Nespelem, where he lives and runs The Ketch Pen Tavern. He was feeling "weak and woozy."

His sister told him that he didn't look too good, and they decided to call an ambulance, which took him to Coulee Medical Center.

After about two hours at the hospital, he was told he had COVID-19, which also gave him double pneumonia (pneumonia in both lungs), and that he was being shipped to Wenatchee to be treated.

When medicine didn't get rid of his pneumonia, doctors put Carden on a ventilator.

"When they put you on a ventilator, they tie your hands and feet up and stick a tube up your throat, oxygen up in your nose," Carden explained. "They keep you tied up so you don't rip the tube out of your mouth."

He said they keep you sedated the whole time you are on the ventilator and that the doctors wake you up only briefly to make sure you're still alive.

"I remember the doctor started to wake me up," he recalled. "They eased up on the sedation, and I remember the doctor pulling that tube out. They loaded me up on this bed cart, shipped me down to another floor to do a CT scan to see if they cleared [the Covid-19 and pneumonia], and they did, they got rid of it."

Next, Carden spent time in the intensive care unit, and then began physical therapy.

"I couldn't walk," Carden said. "I had to relearn how to walk. That ventilator just takes so much out of you. You feel like your body is just so weak. I worked with therapists, and they'd put a strap on you and give you a walker and tell you to pull yourself up with a belt, ... and I was just wobbling, so weak when I started. I couldn't go more than 10 feet, I was so exhausted. It got better and better as the days went on. Still, I was really weak for quite a while."

Carden said he doesn't know how he contracted COVID. But at his tavern, "people are coming in and out all the time," he said. "Some wear masks, and some don't. I was one of those guys; I wasn't taking it serious. I'm not sure how I caught it, or who gave it to me."

Carden's clean lifestyle is what helped him survive, he said: he doesn't smoke or drink, and he's stayed fit through his hobbies of riding horses, golfing, riding motorcycles and more.

A doctor told Carden that "'we're really glad you had good clean lungs; if you didn't, we probably would have packed you out in a body bag,'" Carden recalled.

"I had enough courage and enough prayers from people in the area," Carden said. "The Lord didn't want me, and the devil couldn't catch me. I survived."

Through his physical therapy, Carden got better and better at walking. He came back home after 28 days in Wenatchee and continued therapy in Grand Coulee for a time.

He is now able to do the things he loves.

He said he's operating at about 95% capacity, and that his lungs are still recovering. But he can get on a horse, with some struggle, can still hit a golf ball - but not quite as far as before, just yet - and he can ride his Harley-Davidson motorcycle.

The tavern being closed has meant lost income for him, but he luckily had put money away beforehand and has had help from his brother and sister. He's back to work now, wearing a mask.

"I don't know who I caught it from, when, where or why," he said. "That crosses your mind."

Carden has experienced firsthand what the disease can do and has no doubts about the need to prevent it.

"I use Facebook on my little phone here, and you see the positives and negatives, and you see the people who still don't think this is a real virus and run around without masks," he said. "A lot are carriers and don't know it, and they spread it here and there. I don't know if we'll ever get it under control."

"I'm glad that these businesses are taking it serious and making them put masks on to come in," he continued, "I was one of those non-believers, but shit, I caught it!"

Carden expressed a lot of gratitude for the people who prayed for him, and said people come up to him regularly and tell him they're glad he's still alive.

He's also thankful for a young doctor who gave him a pep talk in the middle of it all, when depression was bad. The doctor's talk helped keep up Carden's morale. Carden said he is grateful for all the doctors, nurses, and staff at the hospitals who waited on him and took care of him to keep him alive.

"I figured my story would be very interesting because I think I'm the only one in the whole area that was put on a ventilator and survived," Carden said.