Almira fire district has been busy 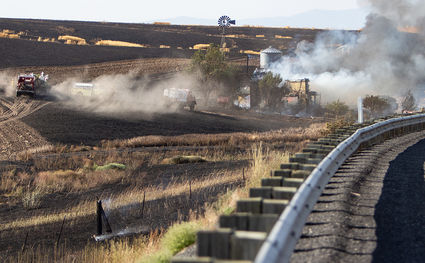 On a hillside blackened with burned wheat, fire fighters work to contain a wildfire that claimed a house on SR-174 Aug. 12. - Scott Hunter photo

The second time was not a charm for that yellow house at the top of the hill on the highway to Wilbur last week after a combine somehow started a fire in a wheat field, the second in three weeks, that totally destroyed the house and tens of thousands of dollars worth of wheat.

Pinar said the same three houses threatened in the Highway 174 Fire July 24 were threatened again Aug. 12, but this time the unoccupied house on the west side of 174 didn't make it. The other two were saved, including the Herdrick home and the Eagle home on the other side of 174. Several outbuildings were also saved.

Another fire, the McKay fire on Williams Road, burned about 50 acres of wheat and destroyed a combine, Pinar said.

Local fire districts rallied to help when the fire broke out Aug. 12. SR-174 was closed about 4 p.m. for a time and not fully reopened until about 6 p.m., the Washington State Patrol reported.

"Great job to our volunteer fire departments from Almira, Creston, Wilbur and Levya crop dusting for an outstanding job," Magers said on his Facebook page. "Several private companies responded with water trucks to support the operation."