Update as of 8/13 on Lower Coyote Creek Fire 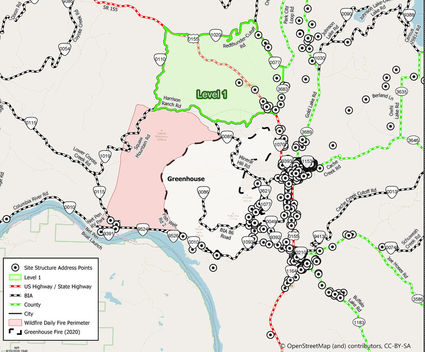 Firefighters say the Lower Coyote Creek Fire is now about 65 % contained and they will begin mop-up operations today, following a successful night of eliminating hotspots and cutting down unburned snags and material in the fire area, which has now been mapped at 2,580 acres.

The Northeast Interagency Incident Management Team 1 has had 11 hand crews, 20 engines, four dozers, a pump cat and one skidgine on the fire, all watching out for hazards like dangerous snags, mine shafts and rattlesnakes.

"Activities: Crews began GPSing the fireline and have more accurately mapped the fire at 2,580 acres.

Yesterday into last night, crews increased containment of the line by eliminating hotspots within 20 feet of the line. Sawyers removed snags, danger trees (trees weakened by fire) and brush that was not consumed in the burnout operations. Crews setup port-a-tanks and pumps in preparation for mop-up operations.

Night time operations will shift to patrolling the fire.

Level 1 evacuations have been dropped for all areas of the fire.

Due to a Red Flag Warning for fire conditions and potential changes to fire behavior, a Level 1 evacuation order was placed Tuesday on the area between Redthunder-Cutoff Road, Mill Creek Road, to Harrison Ranch Road on the Lower Coyote Creek Fire burning about four miles west of Nespelem.

A map of the fire shows the evacuation zone northeast of the burn area and northwest of the town of Nespelem. It straddles SR-155 and includes at least 15 “structure address points.”

Isabelle D. Hoygaard, DNR public information officer on the fire, said the Level 1 evacuation alert means residents should be aware of the danger that exists, and monitor local media outlets for information. Residents with special needs, or those with pets or livestock, should take note and make preparations for relocating family members, pets, and livestock.

Hoygaard said crews will continue to evaluate the fire behavior throughout the day and changes to the evacuation levels are possible. Houses along the Columbia River Road are also now on a level 1 evacuation notice, lowered from a higher alert yesterday.

The fire started Sunday and was estimated to have burned 4,500 acres by Monday night.

Last night, crews made progress on constructing a line along the northern side of the fire, using bulldozers, hand crews and burnouts, Hoygaard said.

Today, aerial support will continue to help to ground crews to slow the fire’s progress. Day crews will continue work on constructing a line around the fire, focusing primarily on its northern section, she said.

The fire is burning directly west of the Greenhouse Fire, which started July 23 near the Colville Tribes greenhouse operation along the Columbia River and had burned more than 5,100 acres over the next week.

No update was issued Tuesday night due to the uncertain fire weather predicted, the PIO said.