The first locomotives at dam construction 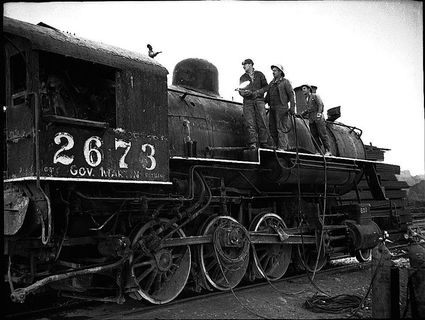 Workers with a cutting torch atop a locomotive that Gov. Martin road from Coulee City.

The first locomotives to haul construction material for the dam were old and tired. Two were on hand in 1935 and had been bought by MWAK to get trains moving.

For the section from Electric City down to below the dam, an old logging locomotive, built in 1926, was purchased. It was of the Shay type of geared steamer, in that it was designed to move via pistons turning a common shaft via gearing attached to the wheels. The speed wasn't high, nor was the pulling power great, but it was perfect for the 5% grades.

Another engine, to be used for the run from Coulee City to Electric City, was far older. It had been built in 1903 for the Southern Pacific Railroad. It was purchased on July 29, 1935, just in time for the official first train to the dam. The cab had Washington State Governor Martin's name painted on it, as he was the "engineer" on that first run. The engine weighed 135 tons and was capable of carrying 50 carloads of cement. It was, however, one of the first engines to be pulled from service, likely due to age. It was scrapped in 1937 at Grand Coulee.