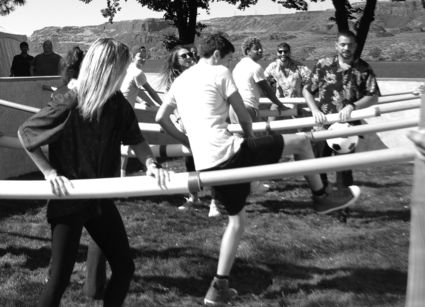 Human foosball teams kick it out in a game during the 2019 Harvest Festival. - Star file photo

More local events that have become traditions have been canceled due to the COVID-19 pandemic.

The Run the Dam running event, as well as the Harvest Festival, have both been canceled this past week.

Both were originally scheduled for the third week in September.

The Grand Coulee Dam Area Chamber of Commerce announced on July 17 the cancellation of what would have been the ninth Harvest Festival on their Facebook page.

Their board of directors "have explored all possible options to keep this yearly tradition moving forward," the chamber said. "Unfortunately, with the Governors "safe start" reopening restrictions, we could not find a manner in which to host the festival, as we all know and love."

The Run the Dam Facebook page made a similar announcement July 20.

"It is with great sadness that we are forced to cancel Run the Dam 2020," the post reads. "We held out hoping for the best, but we know people would like time to cancel their travel plans. ... Please be patient as we work through this strange time."

Multiple comments on that post called the cancellation a "bummer" but said that the decision was "understandable."

The posts for both events expressed optimism for hosting successful events in 2021.

Kelly Buche, who has organized Run The Dam since 2016, said that she'd eventually like to add a full marathon race to the event that currently offers 5k, 10k, and half-marathon lengths.

"My goal is to bring back a point-to-point full marathon," she told The Star on Tuesday. "From Big Wally's in Coulee City to Banks Lake Park is exactly 26.2 miles! It would be amazing."

People have been accepting of the cancellations.

"The feedback from the community has been very understanding," said Rachelle Haven, executive director of the chamber, in an email to The Star. "I believe, sadly, a lot of people have come to expect it from seeing other events being canceled throughout the year in surrounding areas. Some are upset but have been gracious, knowing our hands are tied."

Haven said that surrounding counties being in early phases of Washington State's Safe Start Recovery Plan, as well as Harvest Fest partially taking place on Bureau of Reclamation land played into the decision to cancel.

She said refunds will be issued to a few vendors who had signed up early for the event.

Other events could still happen this year, according to Haven, who said that "the chamber is diligently working to find other events to sponsor that meet social distancing requirements. The 2020 Vintners and Brewers Auction is still actively being planned, for Saturday Dec. 5. We are looking at backup plans if we cannot host it in a large group setting."