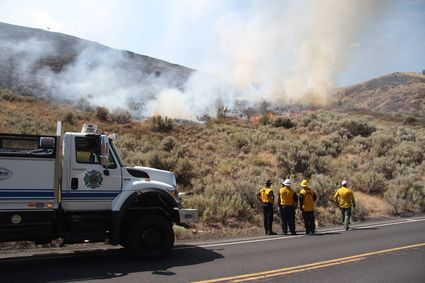 Firefighters keep an eye on the fire as it approaches SR-174 near between mile posts 27 and 28. - Jacob Wagner photos

A wildfire burning in the "Wilbur Hill" area, near mile post 27.5 on SR-174, is mostly contained, fire fighters say. 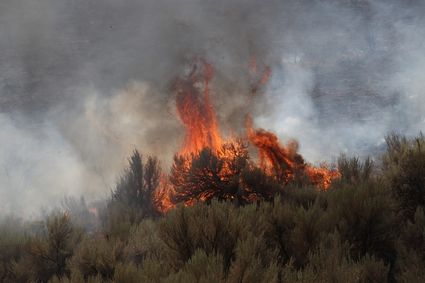 The fire, which started roughly at 11 a.m. today, July 24, had been moving towards wheat fields above the hill, where firefighters concentrated their efforts.

The fire is also approaching the highway, and firefighters are keeping an eye on it, with traffic being stopped and one lane of travel being allowed at a time.

Grand Coulee Fire Chief Ryan Fish, serving as incident command at the scene, said that the road may be closed as the fire gets closer so they can put it out, and prevent it from crossing the highway.

Present at the scene are members of the fire departments of Grand Coulee, Coulee City, Lincoln County, the Bureau of Reclamation, and more.