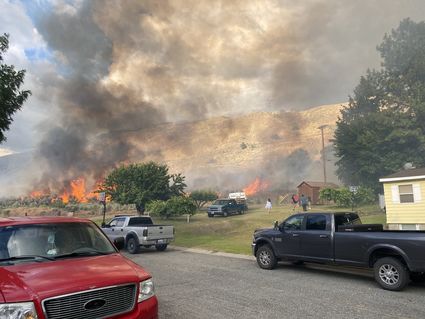 Flames leap as people watch firefighters and residents with garden hoses get ready to hold them back at the north end of Coulee Dam Tuesday night.

Fire fighters from every nearby agency were on scene defending homes and working to try to prevent its spread on the hillside above town, and nearly two hours later were still working. No homes were lost as of this writing at 8:47 p.m.

At about 7 p.m., the wind direction pushed the fire alongside the treed neighborhood that sits against the brushy edge of town, but not directly into houses and an apartment complex.

Firefighters drove trucks across lawns and backyards up the hillside to head off the blaze.

People from the neighborhood gathered on green lawns a block away to watch, but when another stand of brush sent flames 20 feet high the heat could be felt on their faces.

The fire apparently started near an electrical substation at the outskirts of town.

Another fire started, apparently on an electrical pole, in Belvedere at about the same time. Two rigs were dispatched from the Coulee Dam fire to fight it, and a utility truck was on scene with boom and men being hoisted toward a smoking pole top.

The article will be updated as new information is available.