The US Construction Railroad 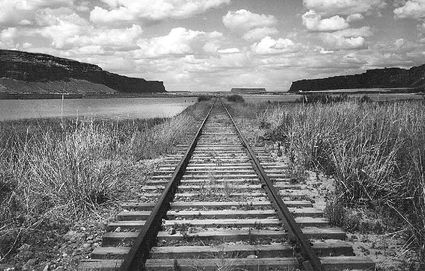 Bids to build the construction railroad were received May 17, 1934, and 22 firms competed for the work. The two low bidders were L. Coluccio of Seattle, and David H. Ryan of San Diego. Irregularities were found in the Coluccio bid, resulting in an investigation of the bids. They came in at Ryan at $235,570 and Coluccio at $236,925. The contract was awarded to Ryan on July 17, 1934, and a notice to proceed was issued August 8, 1934. Ryan claimed to be able to outbid anyone else by already being at the dam site, working on a previous contract. Construction work progressed rapidly, and by the close of the year grading was completed, track was laid, and 90 percent of it ballasted. Track laying in the two-mile end section was delayed, pending the completion of grading, which was being done under a separate contract. Sliding ground, in this section, made necessary certain revisions in location which slowed progress on the grading contract. Gov. Clarence D. Martin and Sen. C.C. Dill were honored guests upon the occasion of "Driving the Golden Spike," which took place Dec. 8, 1934. The first actual train was run on July 27, 1935.