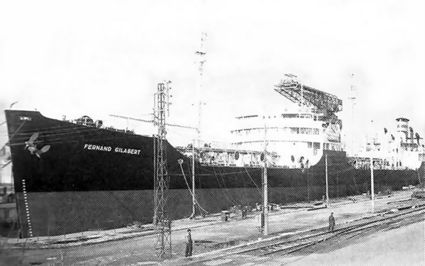 With the advent of World War II, Kaiser Industries, part of the Consolidated Builders Inc. that completed the Grand Coulee Dam, began building ships. Kaiser Shipbuilding Company established seven ship-building locations on the West Coast, including one at Swan Island near Portland Oregon. Here they would build the T2-SE-A1 oil tanker. On May 16, 1944 the 62nd tanker was delivered and christened the "SS Coulee Dam." The ship sailed on May 20, 1944 and returned from service on February 10, 1945, seeing no combat. This tanker was 523 feet long with a storage capacity of 5.93 million gallons. In October 1947 the "SS Coulee Dam" was sold to the French and renamed the "Shapur." In 1948 the French again renamed it the "Fernand-Gilabert." On September 12, 1958 this ship was involved in a collision with the Liberian tanker "Melika" during a monsoon in the Gulf of Oman. What followed is considered one of the greatest maritime salvage efforts ever undertaken. Both ships caught fire, causing crews to abandoned ship, with seven lost on the "Fernand-Gilabert" and 15 on the "Melika." The British navy rescued the surviving crew and extinguished the fires. The "Fernand-Gilabert" was towed to Bombay, India where it was sold for scrap in 1959.