Family loses everything to fire 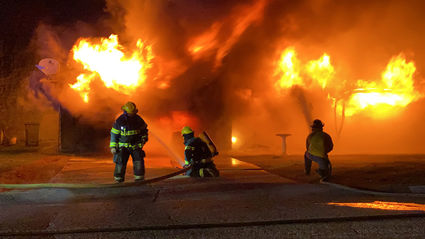 Wind whips smoke and flames toward firefighters as the blaze consumes the home of a Coulee Dam family Friday night. - Scott Hunter photo

A home was lost Friday night when a fire started while no one was there.

Grand Coulee Fire Chief Ryan Fish said those who lived in the house in Coulee Dam had been down the street when it started to burn.

The fire at the home of Shayla and Shawn Deckwa apparently started about 8:30 p.m., Friday, April 10.

At least four fire departments were on scene at 1103 Camas Street with equipment and fire...