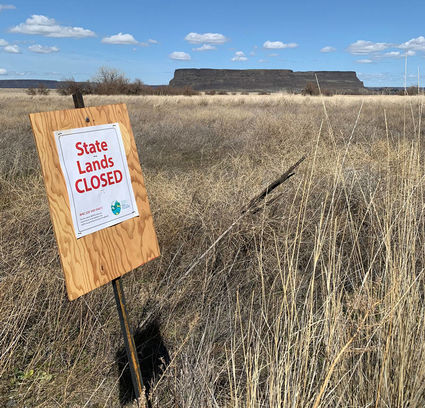 A sign is posted out on State Land near Steamboat Rock.

Local state parks areas such as Steamboat Rock, Osborne Bay, and Northrup Canyon are closed, while Spring Canyon remains open but without services.

Steamboat Rock, Northrup Point boat launch, and Northrup Canyon are all closed to the public until at least April 30.

Steamboat Rock State Park Park Ranger Jared Liening told The Star on Tuesday that the spots are closed to discourage the spread of the coronavirus.

Liening said people have still been using Northrup Canyon despite a sign on the kiosk there saying it is closed.

If you turn off of SR-155 to go to Steamboat Rock, you'll soon see a small sign saying "State Lands CLOSED," and if you drive further, when you get to the park itself, barriers and cones keep you from accessing it.

Barriers are also in place at the Northrup Point boat launch, and at the Osborne Bay boat launch.

If you drive to Spring Canyon, barriers to the camping areas include a sign that explains that all campgrounds at Lake Roosevelt National Recreation Area, part of the National Park Service, are closed due to the coronavirus pandemic, and that the restrooms are closed, water is off, and trash collection is unavailable.

All boat launch docks were to be removed from the water, the NPS stated in a late March press release, but boat launches "will remain open as long as water levels allow."

"Outdoor spaces at Lake Roosevelt, including the lake and most hiking trails, remain accessible to the public in accordance with the latest federal, state, and local health guidance," the release says, encouraging people to use "leave no trace" principles.

Crescent Bay is another local area along Lake Roosevelt that is technically open.

Geezer Beach, located along Marina Way near the east side of the Grand Coulee Dam is open, as well.