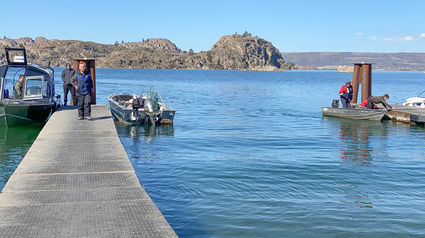 After days of reports of droves of people not complying with his pleas to stay home, Gov. Jay Inslee issued a mandatory order Monday to shut many public places and non-essential businesses in an effort to slow the spread of the new coronavirus.

Inslee emphasized that the though the orders are legally enforceable, officials would still emphasize voluntary compliance. And sheriffs in Lincoln and Grant counties issued similar statements assuring people that law enforcement's role in the shutdown is educate people on the importance of everyone doing their part.

Restaurants and bars were ordered closed earlier except for take-out, which is still allowed.

Boiled down to its essence, Inslee's "Stay home, Stay Healthy" mandate orders us to:

• Stay home, except for essential activities such as buying groceries and going to the doctor or pharmacy.

• Attend no gatherings. Public and private gatherings of any size are banned, including weddings and funerals.

• Close all businesses, except those deemed "essential."

That last caveat was detailed in a 14-page appendix to the governor's order naming 14 sectors of the economy with hundreds of worker positions deemed essential to the functioning of the state or the fight against the virus.

The order came less than a week after the governor ordered all schools in the state to close but to provide meals to students and daycare for medical and emergency workers.

The district is also delivering "academic reinforcement packets" to help keep students learning. Superintendent Paul Turner urged parents Tuesday to also take advantage of a time that will be etched in their children's memory to "provide reassurance that everything will be okay by providing you - not necessarily a daily curriculum. Because school activities will come and go, but you - you

have the opportunity to be the constant comforter and parent to help your children through this unusual time."

The North Central Regional Library system is closed as of today. All items that are currently checked out will be renewed until May 31.

The Senior Meals program at the Grand Coulee Dam Senior Center will switch to only providing meals for delivery. The center regularly delivers meals to those unable to leave their homes.

State campgrounds are closed through April 30, the Washington State Parks and Recreation Commission, Department of Fish and Wildlife, and the Department of Natural Resources announced Monday. Campers with state parks reservations through April 30 were to be notified and offered a full refund.

Lake Roosevelt National Recreation Area also closed all campgrounds and restrooms, and canceled public education programs. Docks at boat launches were also being removed from the water. Outdoor spaces at Lake Roosevelt, including the lake and most hiking trails, remain accessible to the public.

The closure includes churches, too. And the Diocese of Yakima announced that a second priest in Mattawa also tested positive for COVID-19.