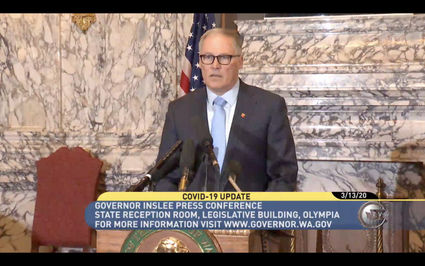 Schools statewide will close by Tuesday, following an orders coming from Gov. Jay Inslee as the state responds to the threat of a new virus that experts fear could overwhelm the healthcare system and cost many lives if its spread cannot be slowed down in time.

Inslee Friday afternoon said the COVID-19 epidemic has reached 15 counties representing 75 percent of the state's population. "A county-by-county approach to this epidemic is not sufficient," Inslee said. "We need to get ahead of this wave, and we need to do it today."

Inslee said in a press conference at 1:30 p.m. that classes would have to end next Monday, March 17, under executive orders he would sign this afternoon.

Both public and private schools are affected.

The governor had said as recently as March 10 that although he was ordering schools in King, Pierce and Snohomish counties closed, he did not expect to shut down schools statewide.

But four days ago, confirmed cases of the illness numbered only 162. Today that count is 568, including 37 deaths then, compared to 24 then, the governor said.

But schools are also ordered to provide childcare for medical workers and first responders as necessary, and providing meals for underprivileged children, many of whom depend on school meals.

Some districts will even be delivering those via their bus drivers, said Superintendent of Public Instruction Chris Reykdal.

Inslee also expanded statewide a ban on public gatherings of more than 250 people, which on Wednesday he had announced for those same three hardest-hit counties where schools are already closed.

Those include "gatherings for social, spiritual and recreational activities, including, but not limited to, community, civic, public leisure, faith-based, or sporting events, parades, concerts, festivals, conventions, fundraisers, and similar activities."

Locally, the Grand Coulee Dam Area Chamber of Commerce, expecting far fewer than 250 people, will go ahead with tomorrow's planned crab feed, but will offer take-out orders for those ticket-purchasers who want them, in addition to seating up to 60 at a time. That approach had been decided on Thursday night, before today's announcement.

Projected differences in the spread of illness with different responses.

Similarly, on Friday morning, organizers of the Elmer City volunteer firefighters' annual pancake feed set for the following weekend told The Star they were "leaning heavily" toward a raffle-only event in light of the advice coming from health authorities.

Expect announcements in near future about local schools

Superintendent Paul Turner issued a brief statement Friday in the wake of Gov. Inslee's order closing schools across the state.

The district had already decided to stop any public gatherings in the schools, canceling at least on memorial service this weekend for Tracy Thiel, whose unexpected passing affected the school where he had been working for some time.

The Governor’s Office states that a brief closure (two weeks or less) of schools is not enough to affect a change for the infection rate of the COVID–19 virus. Guidance from the Governor’s Office, based on known data and epidemiological modeling, is to close schools for this extended period of time.

With the closure, we are treating the coming week as a break for students and staff. This break will give the district time to plan for the extended closure. Expect more communication to come throughout next week on how we will be handling the education of our students during the ensuing weeks.

Local schools have had no confirmed cases of virus

Nor has Okanogan County

There have been no confirmed cases of COVID-19 in the Grand Coulee Dam School District, or in Okanogan County, officials said on Friday.

GCDSD Superintendent Paul Turner said a rumor was circulating to the contrary, which he thought had been started by a student's social media post.

Any confirmation of the illness in the district would come from Turner, himself, he said, not from a student.