Heading to regional and state tourney 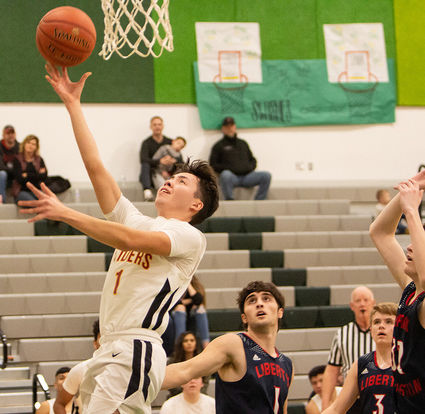 The Raiders won their Districts 5/6 crossover game against a District 5 opponent Friday, and will now move onto the regional tournament beginning in Longview.

Lake Roosevelt played Liberty Christian High School from Richland on Feb. 21 on neutral ground in Quincy in the district crossover game where the Raiders defeated the Patriots 70-28.

CJ Saxon launches a three-point jumper in the second quarter.

Soarin' Marchand hit eight of 10 three-point shots in the game in which the Raiders were 45-16 at the half. That allowed plenty of tournament playing time for the whole team.

The Raiders are ranked sixth out of 16 teams in the regionals/state tournament and will play the number-three ranked Toutle Lake team Feb. 29 at 2 p.m. at Mark Morris High School in Longview.

A win then would mean LR will play in the WIAA State Hardwood Classic March 5 at 7:15 p.m. at the Spokane Veterans Memorial Arena against an opponent to be decided by the results of multiple games.

A loss in Longview would set the Raiders to play March 4 at 3:45 p.m. against the winner of a game between Kittitas and Wahkiakum.