An update on an LR state champion 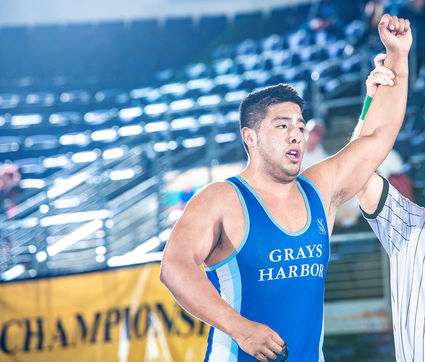 Octavio Alejandre winning last year at the nationals competition in Allen Texas, where he was named an all-American.

Octavio Alejandre was a state wrestling champion for the Lake Roosevelt Raiders in 2015, and is now wrestling at Grays Harbor College, where he has been conference champion twice and became an All-American.

While wrestling for LR, Alejandre placed fourth at state as a sophomore, third as a junior, and was state champ in the 285-pound heavyweight division his senior year.

"What inspired me to succeed in wrestling was my high school coach, Steve Hood," Alejandre told The Star in an email.

"Wrestling has opened many doors for me in life," Alejandre said. But it hasn't always been easy.

"My career in college wrestling so far has been a long journey," he said.

Alejandre attended the University of Great Falls before taking a gap year.

In the fall of 2017 he decided to wrestle for Grays Harbor, studying business and looking to transfer to a university.

"At the moment, I am preparing to go into our college's carpentry program," he said.

Alejandre noted some of his college wrestling career highlights at the college within the National Collegiate Wrestling Association. At GHC, he currently holds the second-best record for career wins at 70%, and he's on track to be first. He's a two-time conference champion and could become the first in the school's history to win three conference championships.

And one experience that stands out to Alejandre the most:

"My most memorable college experience is when I became an All-American last season," he said about placing fourth at the Nationals tournament in Allen, Texas in 2019. "My goal is to be a National champion."

Alejandre currently has a win-loss record of 10-1 for the season and is ranked second in the nation.

Things haven't always been easy for Alejandre, though.

"I fell into a bad hole in my life," he told The Star in a phone call Monday. "I didn't see it coming."

Last fall, without a job or a car, Alejandre fell into a depression, and although he started the wrestling season, he stepped away from the mat for a time, returning in January.

He said that his father, Louis Alejandre, spent time with him over Christmas vacation.

"That helped me back on my feet," he said, adding that he now has a car and a job at the Young Male Christians Association's aquatic department, and will soon be working in the weight room.

"My advice to our young wrestlers or any athlete reading this is to always be the hardest worker in the room, be fearless. Always remember, it doesn't matter where you come from, love what you do, and most importantly, fall in love with the process of becoming the best you can be."

Alejandre will wrestle March 1 in the Northwest Athletic Conference tournament with the chance to win his third conference championship and qualify for nationals again.