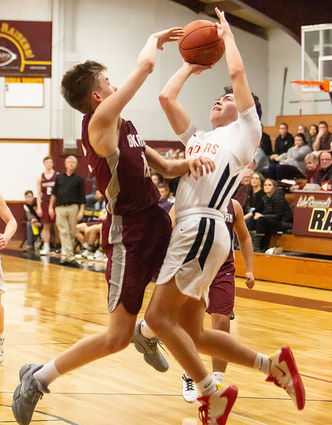 Soarin' Marchand draws a foul on Tuesday against Okanogan near the end of the game in Coulee Dam. Marchand sunk two foul shots to put the Raiders up 52-49, before Okanogan made two more baskets to defeat the Raiders 53-52. - Jacob Wagner photo

The Lake Roosevelt Raiders beat both Manson and Bridgeport last week to hold onto their top spot in the league, but then lost to Okanogan Tuesday night.

Sam Wapato led the Raiders with 17 points, followed by Soarin' Marchand and Hunter Whitelaw, who scored 10 each.

The Raiders then traveled to Bridgeport Friday, where they won 84-35.