UPDATE: Search over for missing man 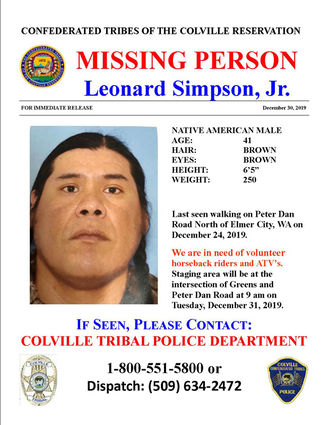 Simpson was found by two volunteers of the search-and-rescue team organized by Chief Hix.

“We are thankful to all the volunteers that showed up to help with the search and rescue,” Chief Hix stated. “Although it was not the ending we had hoped for, the body of Mr. Simpson has been returned to his family and friends. We appreciate the overwhelming amount prayers that helped bring an end to the search for a member of the Confederated Tribes of the Colville Reservation.”

Tribal police are asking for help in a search for a missing man.

Colville Tribal Police issued a poster on Tuesday morning asking for volunteers on horseback and all-terrain vehicles to help.

The poster, emailed to The Star at 10:44 a.m., said a staging area for the search would be established at 9 a.m. at Peter Dan Road where it intersects with the Green property.

Simpson is described on the poster as a 6-foot-5-inch native American male, weighing 250 pounds with brown hair and brown eyes.