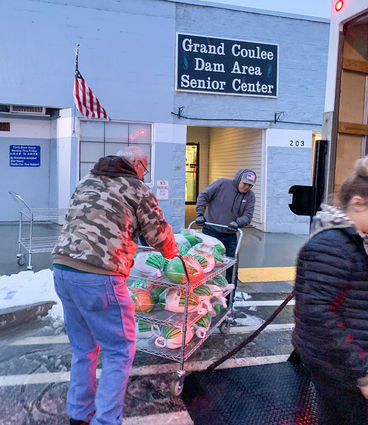 Quick thinking and some downright neighborly effort saved the day last week when hundreds of frozen turkeys could have spoiled instead of finding hungry families.

Pacific Aquaculture, which operates the fish-raising farm in Lake Rufus Woods under contract with the Colville Tribes, each year spends $10,000 worth of turkeys to distribute through the tribal food bank operation, usually at Thanksgiving.

This year, however, the tribes had decided to match that effort, so about 600 turkeys were still safe in the company's walk-in freezer to be sent to the food bank around Christmas.

But on Thursday last week the power went out and the freezer couldn't keep the turkeys frozen. The tribal food operation didn't have the capacity to take all of them.

So Danielle Florenzen, the fish health lab manager at Pacific Aquaculture, called Loepp Furniture and Appliance, where her mother Cindy Fowler works, to ask for help with their delivery truck.

Nespelem Mayor Darcy Epperson, along with Dawn and Raylene Marie Ensminger delivered about 100 turkeys to residents in Nespelem, getting done about 10:30 that night, Epperson said in a Facebook post.

Florenzen reported in a follow-up email on Friday that another 100 to 150 went to the Care and Share Food Bank in Grand Coulee, and the Grand Coulee Dam Senior Center took about 30.

Pacific Aquaculture still had 24 on hand, and Loepps owner Kevin Portch said Tuesday that when they'd delivered all they could, about 135 were still left.

"So we fired up a few freezers," he said.

If you know of anyone in need, give Loepps a call.

"Many of the turkeys still went to tribal member homes, which was great since that was their original intended purpose," Florenzen wrote. "Way to go team!"

"Thank you to the staff at Pacific Agriculture & Loepps Furniture!" Epperson posted. "I love this community...Merry Christmas from the town of Nespelem."