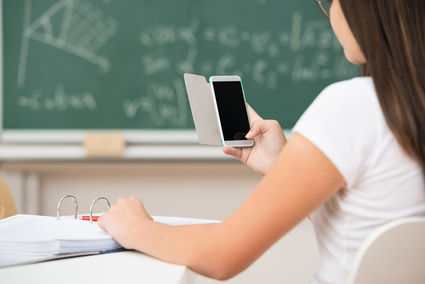 With an ever-growing presence of smartphones and tablets in our lives, how do they fit into the school system?

The topic of smartphones, and therefore social media, came up multiple times at the Grand Coulee Dam School District's Nov. 25 board meeting.

Lake Roosevelt Junior/Senior High School Principal Kirk Marshlain, in his report to the school board, spoke about a new practice on his side of the K-12 school complex: assigning unique passwords to students to access the internet, passwords unique to their own devices.

A student must have a form signed by their parents before they receive a unique password.

That process discouraged several students from signing up, Marshlain said, and he has received fewer complaints from teachers about students being on their devices since the new practice has been implemented.

"We found that students had unfettered access to the internet and were downloading gigabytes of data without any hindrance or restrictions," Marshlain told the board. "They could come here at midnight, sit outside our doors and download and stream whatever they want. ... "We're not saying no to [electronic devices], but we have to have boundaries."

Marshlain explained that if a particular student was downloading large amounts of data, they could speak to that student directly, or restrict their internet access to certain hours of the day, something he said they haven't had to do yet.

He said he made himself available to talk about the topic with the students, an offer a few students had accepted.

"Kids had wild theories, but we put them to rest," he said, noting that one student asked if the school could see everything they were doing on their phones at all times.

He said he told the students, "Hey, we're trying to help you learn instead of giving you one more thing to be distracted by."

"The staff loves it," Marshlain continued. "A lot of them are like, 'About time!' There is a lot of enthusiasm from our staff. A lot of them were saying just no internet period, and I said, 'Well, that would create other issues.' ... Basically, trying to take power away from kids ultimately ends up (with) them trying to take that power back somehow."

Later in the meeting, School Board Director Rich Black spoke about his recent attendance of a Washington School Directors Association conference at which smartphones and social media, among many other topics, were discussed.

"Being able to text at any given moment ... there's some impersonal aspect to texting," Black continued. "You can say whatever you want to and there's no real accountability. Well there is, but you don't have to see the persons face."

Black was happy to see the topic being addressed by Marshlain, and at the conference.

"There's a trend now to be aware of, and to do something about, this destructive behavior that we've encouraged in our society," he said.

A poll on the topic asking readers what they think about smartphones in the classroom can be found at https://www.surveymonkey.com/r/F7GB2GK