Six-year project could start in two, bringing in 1000-plus workers 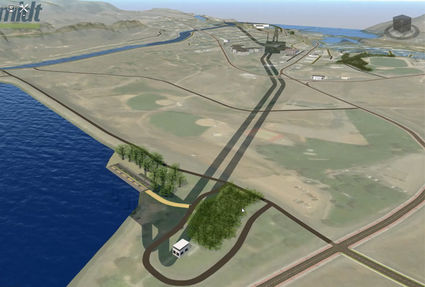 A slide from a presentation given yesterday at the Lake Roosevelt Forum looks east from the project's upper intake area at North Dam and traces the route of the large pipes (dark shadowed lines) 350 feet beneath the surface from North Dam Park, underneath city of Grand Coulee, headed toward its lower intake area in Lake Roosevelt, just beyond the Crescent Bay boat launch within the are protected from boats by the float line barrier behind Grand Coulee Dam.

A proposed $1.4 billion hydropower project is looking more likely to happen in the area, its promoters say, and would bring in 1,000-1,500 workers during construction and create 100-150 permanent jobs.

The Banks Lake Pumped Storage Project would be a gravity-fed, pumped-storage system, draining water from Banks Lake, back down to Lake Roosevelt, turning generators in the process, and later pum...

Good info, Bob, thanks. Actually, the entire project is based on wind power's lack of generation at times, which seems to be propelling other forms of renewable energy, with storage, into a new role.

I wonder how much change in depth would occur in Banks Lake. What could be the daily change? Would it make the Lake better for recreation? Would it affect Sport Fishing?

The article seemed to wave off wind power's lack of generation at times. Yet, there are several examples addressing energy storage both here in the U.S. and abroad. Here's a link that is about the subject of energy storage. https://www.windpowerengineering.com/whats-new-in-energy-storage/