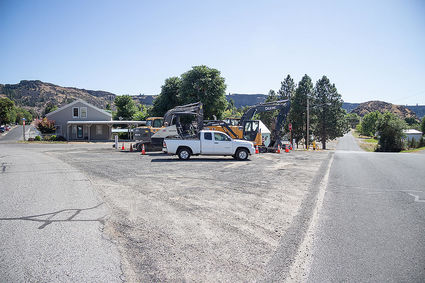 Heavy machinery sits at "the triangle" in front of Electric City Hall Monday, waiting to start construction on projects in the area beginning with pulverizing asphalt on Western Avenue and Grand Avenue on Sept. 3. - Jacob Wagner photo

Construction is scheduled to begin next Tuesday on street and sidewalk work in Electric City.

Updates on the project will be available at http://www.electriccity.us as well as Electric City's Facebook page found under "City of Electric City Municipal Government."

Starting Sept. 3, construction will begin with the pulverization of asphalt along Western and Grand avenues.

"There will be road closures, and intermittent water shutoffs as we proceed on the projects." an Aug. 26 post on the city's Facebook page says.

In July, the city accepted a bid of $1,124,900.96 from Wheeler Excavation of Benton City, Washington for four projects:

• rebuilding Grand and Western avenues and sidewalks for $549,332, paid for with a grant from the state's Transportation Improvement Board and a $33,000 match from the city; and

• the sidewalk project along Coulee Boulevard and near city hall, totalling $264,913, also paid for with TIB money, plus a $16,000 match from the city.

The work is scheduled to continue into December.