Though mostly free, package will still add to customer bills 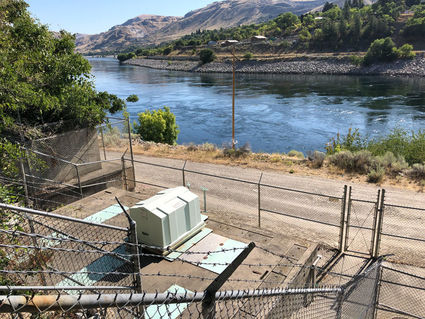 Coulee Dam's west side lift station pumps sewage through pipes under the bridge over the Columbia River to the wastewater treatment facility, which can be seen across the river. - Scott Hunter photo

Coulee Dam's wastewater customers will shoulder an additional $2 a month on their sewer bills after the city council solved two big problems with one vote last Wednesday.

The council voted 3-1 to accept an additional $1.2 million in loan and grant money to pay for two new lift stations for pumping sewage to the new wastewater treatment facility.

Loans have to be repaid; grant funds do not.

That additional $304,000 loan will add about $2 a month to the bill per one residential unit, City Clerk Stefani Bowden said Tuesday. It's a 40-year loan. One equivalent residential unit (ERU) is currently charged $67 a month. Bowden said the final rate may not be known until operating costs of the new plant are determined after a couple years of running it. The new plant is more automated than the one it replaced.

Councilmember Fred Netzel wanted more details from consulting engineers Varela & Associates on what exactly the money was paying for before accepting the loan, and he wanted them to either attend the meeting or outline the expenses in a letter.

Bowden said that it would be smart to secure the low interest rate of 2.75% on the loan, and accept it sooner rather than later.

Other council members present, - Keith St. Jeor, Mervin Schmidt and Ben Alling - agreed with Netzel about wanting further engineering details, but opted to go ahead and accept the loan to secure the low interest rate.

The additional funding solves one problem that was not addressed when the new treatment plant was planned: how to also fund a new west-side lift station, which was loosely estimated at $500,000 several years ago.

The funding also pays for an unanticipated expense of the east-side lift station that will pump Elmer City's sewage to the plant.

Elmer City is considering building its own plant.