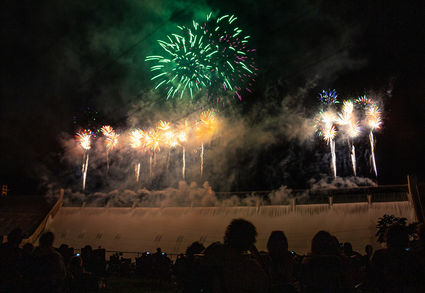 In the park below the Visitor Center July 4, people watch the fireworks off Grand Coulee Dam, put on by the Grand Coulee Dam Area Chamber of Commerce. The chamber reported receiving praise for this year's "best ever" fireworks from many people that night and in emails later. Their Festival of America, which draws thousands each year to Coulee Dam, suffered no "major drama" this year, reported Executive Director Peggy Nevsimal, despite a thunderstorm during set-up time on Tuesday, and one lost child Thursday who was quickly reunited with her parents. Nevsimal noted she was grateful for Bureau of Reclamation's security personnel being out in force and very helpful during the festival. More festival photos are available here:

And here's a video of the fireworks finale: