Them Dam Writers help preserve local history on the internet

Seaton's Ferry and The Green Hut restaurant are just two sites from the community's shared past explored by Them Dam Writers.

Them Dam Writers, a local group that has existed in one form or another for decades, has been putting their stories on the internet, helping preserve both-well known and lesser-known local history, and sharing photos both old and new.

The group was started in 1985 and helped focus the efforts of locals who had been helping record local history for decades before that, eventually publishing a book titled "Coulee Collection" in 1998.

Most recently, Jay Kemble has helped revive the group, bring it online, and keep it within its original intent of preserving local history.

"My goal is to bring more history and present it in a way that it is new and fresh," Kemble told The Star, accentuating the importance of getting it online, and adding that he plans to make a full website devoted to the content of the group. "I love the history because, like nature, it defines the world in which I live. It is part of the land."

Much of the group's recent content can be found at http://www.facebook.com/themdamwriters, and some of the individual members in the group also have their own blogs.

In his "The Green Hut, a Lifelong Mentor," Bert Smith recounts a childhood in which he collected bottles to turn in for one cent each, describing things only someone who grew up here would know, like a 1960s band in Coulee Dam.

"Drinking beer was commonplace at those community teen dances despite being under the wary and watchful eyes of local chaperones," Smith writes, "and once a beer was consumed, the bottle was often tossed into the bushes next to Fiddle Creek."

Smith goes onto describe his fond memories of buying candy at The Green Hut with the money earned from turning in the bottles he collected, and frequenting the restaurant, located near where the Grand Coulee Dam Visitor Center is now, as he got older.

Another feature of Them Dam Writers is a collection of rare old images and newspaper clippings titled "The Margaret Seaton Scrapbooks." It's presented by Sam Taschereau, the grandson of local pioneer Sam Seaton, and is accessible on the group's Facebook page, as well as on Taschereau's website, cousinsam.blogspot.com.

Another Dam Writer, Dan Bolyard, describes President Truman's visit to the Grand Coulee Dam in a piece he wrote, accompanied by old photographs.

Edith Lael, one of the original founding members of Them Dam Writers, describes "Forgotten Communities" that have "disappeared under reservoirs, under grass and sagebrush, hidden by the years of blowing dust."

"Rimrock was south of Steamboat Rock," Lael writes. "It sat alongside of the dirt road from Coulee City, near the Y where one branch led on up through Barker Canyon, the other continued on to the Grant County Ferry at the Grand Coulee Dam site. The Steamboat Rock schoolhouse was moved from the north side of this huge rock island to Rimrock to be available to more students. There was a store there and a great view of The Devil's Punchbowl, and the sound of falling water as the snow melted on the high country and tumbled over the coulee wall." 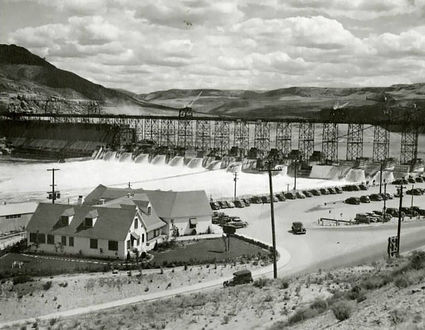 Seaton's Ferry and The Green Hut restaurant are just two sites from the community's shared past explored by Them Dam Writers.

Kemble himself pumps out a large amount of content. His website, found at https://littlevirtualmuseuminthecoulee.com, includes photos and histories of Rattlesnake Canyon, old mines, many people, old buildings, and much more.

Kemble anticipates the group releasing more content in October, and is himself writing a book on the history of Steamboat Rock slated to be released in 2020 for Arcadia Publications for their Images of America series.