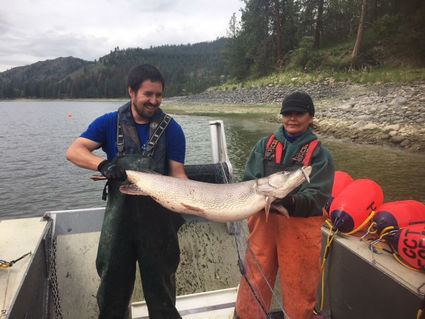 Daniel Monaghan and Florence Stensgar of the Colville Tribes Fish and Wildlife department, netted this 43.3-inch, 28.2-pound, egg-filled female northern pike in the Sanpoil River arm, the mouth of which is just 17 miles from Grand Coulee Dam. Monaghan said they caught a similar size male prior to catching this one.

An effort to remove a problematic, invasive fish from local waters has united multiple groups towards the common cause.

The predatory northern pike are said by biologist to be a threat to native fish populations.

"We set out 475 gillnets using 10 boats in the upper one third of Lake Roosevelt," said Holly McLellan, fisheries biologist for CTFW. "This is the primary northern pike spawning location. Of the 433 northern pike that were removed, about half were pre-spawn females and each female holds approximately 10,000 eggs, so we stopped at least 2,160,000 eggs from being released into the water during the one-week survey."

CTFW staff are also surveying the Sanpoil Arm of Lake Roosevelt for northern pike. According to biologists, the pike are a threat to the Sanpoil River's largest native redband trout population.

Pike are found in slow-moving streams and in shallow, weedy places in lakes and reservoirs. They are an ambush predator and can lie perfectly still for long periods and attack prey with remarkable speed. They eat frogs, insects, birds, trout, steelhead, salmon and also other pike.