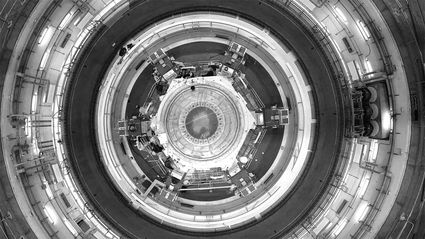 An overhead view of workers inside G-23, one of the generators in the largest hydropower facility in North America, Grand Coulee Dam. It's a view not available in physical tours, but is in a new virtual reality tour offered at the dam's Visitor Center starting this Saturday, May 25, the same day the first Laser Light Show of the season will be shown. - photo courtesy of Pixvana

The Grand Coulee Dam was built during the Great Depression and is now entering the future via interactive, 360-degree virtual reality tours becoming available this weekend.

Up to four users at one time will wear Oculus Go headsets that will allow them to experience the Grand Coulee Dam from top to bottom as the audio tells facts about the dam.

The 360-degree technology allows the user to look up, down, and around at their "surroundings."

"We filmed over the course of two full days during the summer of 2018," said Ted Youngs, the founder of Big Power Project. "The [Bureau of Reclamation] gave us amazing access. We were the first crew to take drone footage from the dam, and they also allowed us to push the envelope by shooting from an inflatable dinghy from below the 350 foot-plus tall dam face and by attaching our gear to a bridge crane that traversed the almost quarter-mile long Third Power Plant."

The 360-degree video "brings viewers inside the Dam's Third Power Plant, showcasing the impressive infrastructure and teaching visitors the inner workings of how hydroelectricity works," a May 21 press release from Pixvana states.

The company calls the Third Power Plant "one of the largest and most complicated power-generating facilities on the planet," which can produce enough electricity to power approximately 3 million homes.

Their "fully immersive experience" includes never-before-seen footage that "spans from the top of the dam, inside the water-fed generators, all the way down the 5,000-foot-long face - and everywhere in between," the release said.

"The Grand Coulee Dam is one of the most fascinating facilities in the country, but high security, the extremely loud volume of operation, and other physical barriers make it difficult to experience live," said Rachel Lanham, Chief Operating Officer for Pixvana. "[VR helps] viewers learn in an exciting new way that increases retention, memory, and empathy. An immersive VR tour ... allows the facility to engage its visitors, in a fun, low-cost, impactful way."

A teaser video available at https://spinxr.com/VGRFFQDRX allows people to watch the video on their computer, and click and drag to look around 360 degrees.

A USBR spokesperson could not be reached for comment Tuesday.

Pixvana, founded in 2015, has been involved in virtual reality videos for training waitstaff on a cruise ship, virtual reality therapy, and entertainment projects for NBC Universal.

Big Power Project, founded in 2018, does work ranging from virtual reality to documentaries to large scale installations, according to their website.