Flood watch issued for this area this afternoon through evening 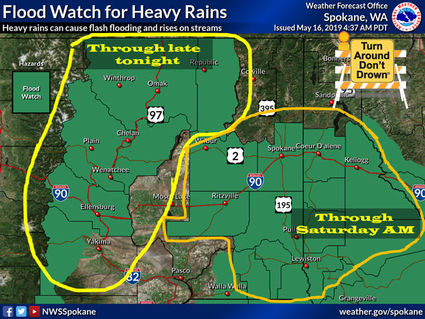 The National Weather Service has issued a flood warning.

The National Weather Service in Spokane has issued a flood watch for areas in North Central Washington and Eastern Washington, including around Grand Coulee Dam.

NWS is warning of showers and thunderstorms that might be capable of flash flooding from 2 p.m. today through late tonight, Thursday, May 16.

"* Flood Watch for portions of North Central Washington and

Northeast Washington, including the following counties, in

* From 2 PM PDT this afternoon through late tonight

* Showers and thunderstorms will produce locally heavy rain this

afternoon and evening. A few storms may be capable of producing

flash flooding. Widespread rain amounts of a half inch to inch

are forecast but higher amounts are expected under

* Rapid rises on creek and streams is likely where heavy rain