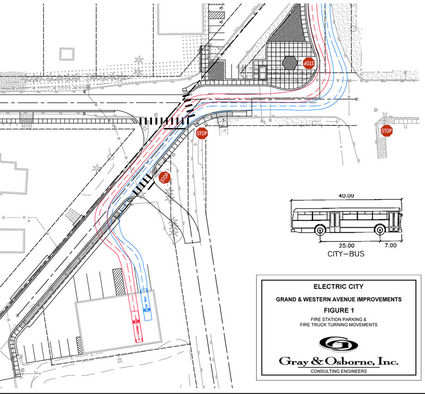 An engineer's schematic shows the route of fire trucks and placement of stop signs on a new street design. The figure, presented to the city council, shows a conceptual footprint of the improvements, along with the typical vehicle path for a fire truck, both as it travels from the fire station to SR-155 and on a return path from the highway to the station. The lines are created by using the American Association of State Highway and Transportation Officials (AASHTO) standard turning template dimensions, the engineer said. The turning templates account for the physical space requirements needed to turn a vehicle of a particular class. It is typical to design for the largest vehicle that will frequently use the intersection, in this case the templates for a city bus were used and require more space than a typical fire truck. - Courtesy of Gray & Osborne, Inc.

The city of Electric City, as well as engineering firm Gray & Osborne, maintain that they did consider emergency traffic in regard to the upcoming intersection change in Electric City, although not speaking directly to the fire chief about it.

An upcoming intersection change in Electric City, which will remove a stretch of Western Avenue at a Y-shaped intersection in front of city hall, wa...