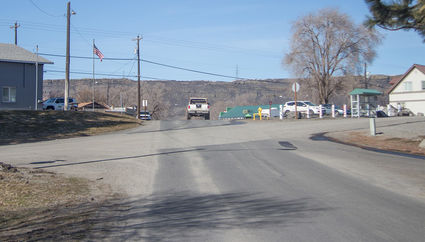 A pickup passes the Electric City Hall on a portion of Western Avenue that is set to be closed off under a new plan the fire chief doesn't like. Fire trucks would have to turn right at this intersection as they left the station, the parking lot for which is off camera to the right. - Jacob Wagner photo

Fire Chief Mark Payne doesn't think Electric City should get rid of the Western Avenue branch of the Y-shaped intersection near city hall that currently branches into Western and Stevens Avenue.

Part of Electric City's projects to build sidewalks and improve streets in the city involve building a sidewalk that wraps around the front of city hall and would eliminate the Western branch of the "Y...