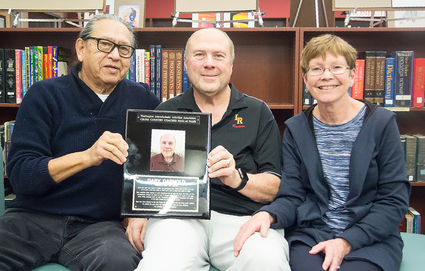 Gary Darnold is flanked by school board Director Ken Stanger and wife Sheila Darnold for a photo after Monday's board meeting. - Jacob Wagner photo

Gary Darnold, who coached cross country for Lake Roosevelt for 40 years, including 38 state meet appearances, was inducted into the Washington Interscholastic Athletic Association's Cross Country Coaches Hall of Fame on Friday in a ceremony held in Tacoma.

Darnold coached the sport from 1977 until 2016, and in that time there has been at least one runner at state 38 times, 21 times the team has gone to state including 185 athletes, and had 15 individual finishes in the top eight at state.

"He encouraged and supported his athletes with every ounce of his being, believed and never stopped believing in us all," said Ann Green in an email to The Star. Green ran for Darnold from 2005 to 2007, made it to state in 2005, and currently co-coaches the LR cross country team.

"He is the type of coach that regardless if you know him or not, he just got your respect," Green continued. "He never once got mad or raised his voice. The only thing he would raise was his finger, with a smile, when instructing someone who either wasn't paying attention or was being disrespectful to go run the sand hill. He has the kindest heart and was always helping one of us when we were struggling. He would talk to us, help us see where we can do better, and kept encouraging us to keep doing our best.

"I do want to say Congratulations, Mr. Darnold," Green continued. "I am honored to have been coached by you; you deserve this award and much, much more."

"Mr. Darnold was a great coach and a great person," said Nicholas Barnaby, who ran cross country from 2002 to 2005 and made it to state two of those years. "He knew the right things to say and knew the right drills that would push our breaking point further and further. He also understood some days we were tired and our body just didn't want to go, and he had no problem letting us rest for those reasons. He couldn't be around all the time to watch us, but he made it so we all pushed each other in practice and in meets. We were always accountable, especially the upperclassmen. Cross country kind of seems like an individual sport, but he definitely made us a team! So glad to have had Mr. Darnold as a coach in my life." 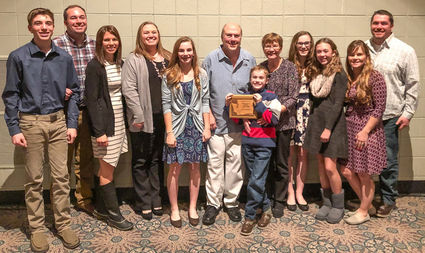 The "Darnold 12," as Sheila Darnold refers to the family, attended the honoring of Gary Darnold at the ceremony last week as he was inducted into the state hall of fame of great coaches. From left, pictured are: Drew, Brian, Tara, Lori, Bayleigh, Gary and Sheila Darnold, with Parker between them, Sheila Adysen, Rylee, Tiffany and Steve Darnold. - submitted photo

Grand Coulee Dam School District Board Director Butch Stanger nominated Darnold for the award in 2017, and Sheila Darnold, Gary's wife, helped collect letters of recommendation for him to receive the award.

Darnold was also honored at the school board meeting Monday and was shown a plaque commemorating his time as a coach that will hang in the school somewhere.

Darnold thanked wife, Sheila, "for all she does. Her support was tremendous. I couldn't have done it without her."

Darnold also thanked Stanger and the school board and staff for their support.

And Darnold thanked the runners:

"More than anything, I think this reflects on the athletes that have been here," Darnold said. "I've never ran in a cross country race. I always felt that I got more from them than I gave. I'm a very small part of this; it's the hundreds of athletes and the thousands of miles of effort they put out for this school."