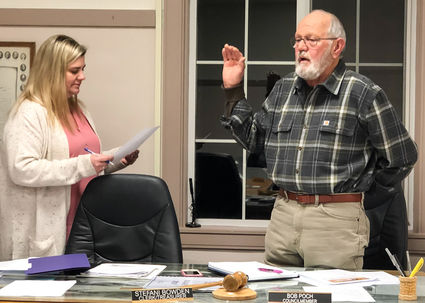 Coulee Dam has a new mayor.

Bob Poch was elected by the city council last week to take the place of Larry Price, who resigned Dec. 6, 2018.

The council did not discuss the motion made by Councilmember Ben Alling and seconded by Councilmember Keith St. Jeor, immediately voting to seat the new mayor, who had been filling the post as mayor pro tempore since Price's resignation.

"Thank you all for your confidence," he said, before launching into the rest of the regular meeting of the council.

Poch had served on the council for several years starting in the late mid-1980s, then again for one year in 2014. He resigned one year after taking that council seat, the first in the new administration of then-mayor Greg Wilder.

A year ago, he was sworn in as a council member again, having just been elected in November 2017.

He's lived in Coulee Dam since he was a child and made a career as a lineman for Nespelem Valley Electric.

Poch said in a brief interview Friday that his goals for the town include transparency in government, getting the new sewer plant up and running, and re-establishing better rapport with Elmer City, which disagrees with charges imposed by Coulee Dam for sewer services and also plans to build its own wastewater treatment plant.

"I just kind of want to get things settled down again," Poch said.

Poch's seat on the council is now vacant.