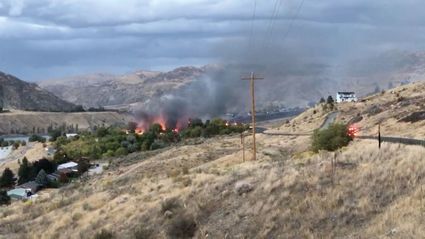 If you're thinking of driving to Elmer City to take a look at the fire, don't. The road is blocked.

High winds threw the fire across the highway 155 tonight after a fire started in the trailer court below the highway.

Details are sketchy now, but one person with a radio said at least three mobile homes had burned, and from a vantage point a couple miles away the fire apparently had burned up a ravine that skirts the town to its south, threatening houses on the hillside.

A fire truck drove up to one near the top of the street that a woman watching from the former highway tire building more than a mile away said was the house she was living in.

She had left with her children just in time after having just returned from buying groceries, driving south on the highway, now in flames on either side.

In the wind, the fire raced up the hill. In the video below, the black strip heading uphill from the lower town is all burned land.

Below is a brief video. More on this tomorrow.