Drivers will have to slow down 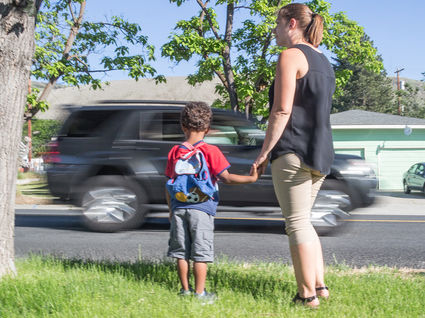 Amanda Burton and her son watch the traffic speed past on River Drive, a street her children will eventually need to cross to get to school. - Scott Hunter photo

When Amanda Burton moved into a house on River Drive in Coulee Dam, she noticed it's a very busy road with no crosswalk where drivers often speed through, very near Lake Roosevelt Schools.

Her kids are a couple years away from walking to school, but about 15 kids cross to and from the school every day, she told the Rotary Club last week.

River Drive is also SR-155, which slows to a 35 mph speed zone at the city limits as drivers approach from the north.

"A lot of people don't slow down when they hit that," she said. "They're probably going about 60 through that area that should probably be about 20 mph."

Burton contacted the school district about the problem, and also the state Department of Transportation, to research solutions.

The Coulee Dam Town Council passed an ordinance May 9 establishing a school zone along River Drive, from 300 feet south of the intersection with Civic Way, at the school's corner, to 150 feet north of 12th Street at the town's northern edge.

The local Lions Club has pledged $300 of it, and the Rotary Club is considering a contribution as well.

Burton said Coulee Dam's police chief is working on a grant that would allow installing beacons for a crossing next year if approved.