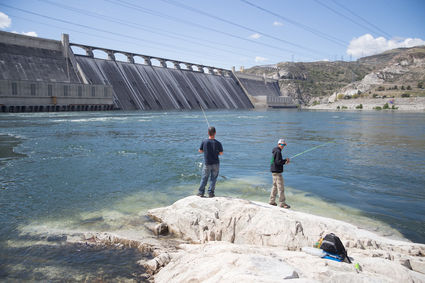 Local men Kerry Green and Sean Gorr enjoy the newly reopened fishing spot next to the dam on the reservation side near the Third Powerhouse Monday morning. Green said they had been catching and releasing walleye and trout. The spot had been closed since sometime after the September 11 terrorist attacks. Both Green and Gorr had fished in the spot back in the day, and Green said that returning there brought him back to his childhood. - Jacob Wagner photo

You can now fish along the east side of the Columbia River near the Third Powerhouse of Grand Coulee Dam from sunrise until sunset.

Closed after the September 11 terrorist attack in 2001, the spot is being reopened nearly 17 years later and will be patrolled by Colville Tribal Enforcement, a Colville Confederated Tribes Fish & Wildlife press release stated Friday.

Boats are not allowed pa...